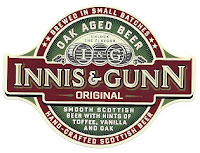 There’s been a lot of talk recently about the rise of “craft keg”. However, despite the assertions of BrewDog, realistically it is not going to mount any kind of head-on challenge to cask beer – it will be confined either to venues that don’t have the facilities or turnover to sell cask, or to specialist low-volume beers. You can drink BrewDog Zeitgeist on keg in the Magnet in Stockport, but it doesn’t exactly threaten the fourteen or so cask beers on sale there.

In the past, the vast majority of British keg ales have simply been inferior equivalents of beers also available on cask, or brews at the bottom end of the market that never even made it to cask. No beer enthusiast would really be inclined to bother with them. However, in an interesting development, Innis & Gunn have decided to launch their 6.6% ABV oak-aged beer in keg form, to be sold only in halves and one would expect at a hefty price.

I can’t say I’ve enjoyed this when I’ve tried it in bottle, but it does seem to have built up a following which justifies its launch on draught. The presence on bars of a distinctive, British-brewed ale with a “connoisseur” image that isn’t available in cask form is something entirely new – it will be interesting to see how it does. And, if it succeeds it will reinforce the perception of keg, not cask, as the high-quality, carefully presented product commanding a price premium.
Posted by Curmudgeon at 6:27 pm