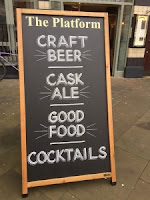 You often nowadays see “craft” and “cask” being treated as two entirely separate and mutually exclusive categories, both in discussion about beer and in publicity material. The pub advertising board shown at the right is a typical example. On the face of it, this seems nonsensical, as surely much cask beer ideally fits the textbook definition of craft production as small-scale and handcrafted.

However, the way it has arisen stems from the way the term “craft”, in a beer context, was borrowed from the USA. As I described here, in that country the existing tradition of small-scale, regional brewing had largely died out by the early 1970s, so what began as the microbrewery movement, and later metamorphosed into craft, was starting with a clean slate, and could concentrate all its efforts on differentiating itself from “big beer”.

The UK, though, was different, as it had preserved a substantial stratum of small and medium-sized breweries majoring on its own unique ale-brewing tradition, and had a further layer of newer microbreweries on top of this. But when the craft beer movement was transplanted from across the Atlantic in the 2000s, it decided to set out its stall in opposition to this existing tradition rather than the industry giants. Real ale, much more so than international lager, was what they were not.

Real ale culture was seen as fuddy-duddy, narrow-minded and inward-looking, whereas craft beer was modern, youthful, dynamic and international. This was most marked in BrewDog’s PR schtick, but it extended much more widely than that. And a key point of that differentiation was that craft brewers produced modern keg beers which, we were assured, were nothing like Red Barrel.

This division wasn’t entirely one-sided, and many real ale supporters have been critical of craft beer, but the initial impetus for it very much came from the craft side. This is underlined by the dimissive attitude many craft enthusiasts take towards the independent family brewers, who for many years were the principal standard-bearers of quality beer in this country.

Of course, many of what are considered as craft brewers do produce cask beers, and some major on it, but the cultural connotations of the two concepts remain diametrically opposed, and that is why they have become established in the public mind as mutually exclusive categories. Craft beer, essentially, is fashionable beer that does not carry the baggage of either real ale or mainstream lager.

Although sections of the beer commentariat may rail against it, it must be recognised that many of the products regarded by the drinking public as “craft” are in fact owned by the international brewers, to a much greater extent than real ales, and this has only been intensified by the big brewers’ craft acquisitions of recent years. And, if the US definition of craft (which has more to do with company size and independence than type of product) was extrapolated across the Atlantic, the likes of Greene King and Marston’s would certainly quality. They are smaller in terms of market share than Boston Brewing and Sierra Nevada are the USA.

It’s also noticeable how, in other countries with long-established brewing traditions such as Belgium and Germany, craft beer is usually taken to mean something different from their own indigenous styles, and very often is an international-style, heavily hopped IPA. As I said in the article I linked to above, real ale, and other countries’ own individual styles, is beer from somewhere, craft is beer from anywhere.

Posted by Curmudgeon at 8:08 am