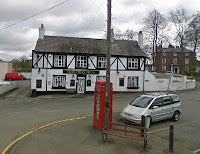 The Pollyannas of the beer blogosphere are always telling us that, despite the gloomy headline numbers, there are still great prospects in the pub trade if you get the formula right. So here’s a golden opportunity for you – the Nag’s Head in the large south Cheshire village of Wheelock.

It’s an attractive freestanding pub by a road junction at the south end of the village, which appeared in the 2010 Good Beer Guide. Currently closed, but not yet boarded up. Maybe a bit tatty at the moment, but nothing a lick of paint couldn’t sort out. There’s no shortage of houses nearby, so plenty of potential walk-in trade. It’s a fairly prosperous part of the country – certainly no run-down urban wasteland – and not too far from Crewe which is a major centre of population. Surely a great chance to mix a cask-led local with a bit of destination dining trade, or maybe a showpiece tied house for a local micro-brewery. And currently available, freehold and completely free of tie, at a knock-down £125,000.

The estate agents’ fact sheet can be seen here.

In practice, for any budding pub entrepreneur, there are plenty of pubs on the market in promising enough locations at very reasonable prices. But there’s little evidence of people being prepared to put their money where their mouths are.
Posted by Curmudgeon at 3:25 pm