Going out of style

I can’t say I have much time for style bars, but it had always been assumed that their trade would withstand the smoking ban better than that of traditional pubs. But apparently, since the ban, a third of them have lost trade.

And, as customers become more concerned about their mortgages, pub food isn’t exactly proving to be the saviour it was claimed to be, either.

Posted by Curmudgeon on September 29, 2007 No comments:

After originally puffing the smoking ban to high heaven, it’s good to see reality breaking out in October’s issue of What’s Brewing:

A potential resurgence of cask ale could be delayed by the English smoking ban, but it’s not all doom and gloom, according to a market analyst.

Graham Page, from AC Nielsen, said there was potential for the cask ale market to move into growth, after several years of decline, but believed the poor trading of pubs as a result of a wet summer and the effect of the smoking ban might prevent this for the next few years.

He’s predicting total beer sales in pubs could drop by as much as seven per cent in 2008 – meaning up to 200 million fewer pints sold.

…the next few years… …as much as seven per cent… - now that is a serious setback to the pub trade, although one that was predicted by opponents of the ban.

I was also rather taken by this brief letter from one Peter Edwardson of Stockport (ahem!):

I assume all those campaigning for local real ale will also be advocating the banning of imports of Budweiser Budvar or having it brewed under licence in Northampton.

Posted by Curmudgeon on September 28, 2007 No comments:

The recent lack of postings is explained by the fact that I have just come back from a holiday in Northern Ireland . Despite its reputation as a scene of sectarian conflict, it is in fact well worth a visit, with splendid scenery, a wealth of fascinating historic sites and quiet, well-maintained roads. Belfast can also offer restaurants of a quality to match any other major British city. But one significant problem I came across was that it was extremely difficult to find any decent, informal lunchtime food such as would typically be offered by pubs in Great Britain. Sometimes it was hard to find anything at all.

For example, I visited Ardglass in County Down, a picturesque fishing port noted for its “seven castles”. There was nowhere at all to have a meal or snack, whereas in its English equivalent there would probably be four or five pubs offering good food. I ended up having to get a sandwich from a small supermarket. It’s not uncommon to find a village or small town with six or eight bars on its main street, none of which give any indication of offering food. The smoking ban has obviously not led Irish pubs to broaden their horizons.

I have to say I had a similar experience when I visited the Republic in the mid-1990s and was disappointed to find things really no better in the North a decade later. Now obviously this must stem from a fundamental social difference, that people in Ireland just don’t go out and generate the demand for lunchtime food that we do over here. But it must be a major factor holding back the tourist trade and giving visitors a negative impression of the country on both sides of the border.

Posted by Curmudgeon on September 18, 2007 No comments:

The truth will out

The Publican newspaper was widely criticised for seeing the smoking ban as an opportunity for pubs rather than a threat. But its contributors now seem to be waking up to the truth. See these two pieces:

The smoking ban - your experiences

Posted by Curmudgeon on September 04, 2007 No comments: 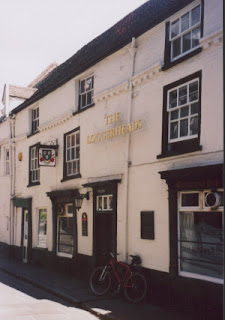 I’ve written before in praise of York, and Shrewsbury deserves praise too. Although on a smaller scale than York it’s a very atmospheric historic town with a wealth of half-timbered buildings, and the best of its pubs bear comparison with anywhere – in particular the Loggerheads must be one of my top ten pubs anywhere in the country. There's an excellent on-line guide to Shrewsbury pubs here.

Posted by Curmudgeon on September 02, 2007 No comments:

I’ve written to What’s Brewing myself on the subject before without my letter being published, so it was good to see the following appear in September’s letters column from Jim Sack of Birmingham:

Why is CAMRA encouraging drinking and driving on bicycles? We all know the dangers of drinking and driving motor vehicles but being drunk in charge of a bicycle can be just as bad. A bicycle is not just ridden, it must be driven ie steered, slowed, braked and stopped. Alcohol can impair the judgment of a bike rider just as it can that of a motorist.

I do feel very uneasy when reading WB articles on pub cycling tours.

The fundamental law is exactly the same for drivers and pedal cyclists – you must not drive or ride while under the influence of alcohol. The only difference is that there is a prescribed alcohol level for drivers above which somone can be prosecuted without any supporting evidence of impairment.

Now I have no objection at all to someone going out on their bike and having a couple of pints. But it is wrong of What’s Brewing or any other supposedly responsible publication to print articles that actively encourage people to do so, or imply that it is “safe”. Some CAMRA newsletters – particularly that published by the York branch – are equally guilty of this.

Also see this column of mine from October 1999.

Posted by Curmudgeon on September 01, 2007 No comments: