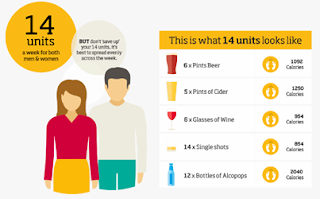 Last year, the recommended maximum levels of alcohol consumption were reduced to just 14 units a week for both men and women, the equivalent of a mere six pints of 4.0% beer. Many people, with justification, will dismiss this as a ludicrous exaggeration of risk. But, on the other hand, many others who are more inclined to accept official messages at face value will take it to heart, and it will strengthen the hand of the anti-drink lobby by, at a stroke, greatly increasing the number of “problem” drinkers.

If you’re reading this, you’re probably fond of the odd drop of beer. But you will have realised that, if you mix in varied circles, with family and work colleagues, that there is a huge divergence in attitudes to alcohol within society. I recently made an estimate that, in the course of a year, I probably drank about 600 pints in pubs, or about eleven and a half a week *. Assuming an average strength of 4.2%, that’s 28 units a week, which supposedly puts me in the category of a “hazardous” drinker. To be honest, having looked in to the statistics, I’m not remotely bothered about any additional risk that involves, and in the overall scheme of things it’s pretty trivial. If you never did anything that involved any risk, you’d never do anything at all.

But many people would look at that figure and say “ooh, 600 pints, that’s an awful lot of beer!” while others would probably dismiss me as a lightweight. If you believe what they say on social media, many people scarcely ever seem to be out of the pub. Now, so long as they’re doing it with their eyes open, I’m the last person to sit in judgment on others, and perhaps some of them have a tendency to big it up. However it is clear that a substantial, although diminishing, number of people continue to jug it back with gusto, while others look on with pursed lips thinking “Eww, a whole pint!?”

I wrote about this divide in a column from 2006, where I said:


“It is striking nowadays how at some social gatherings people look askance at a level of alcohol consumption that at others would seem untypically modest. We are becoming two nations marked by our tolerance (or lack of it) for alcohol, and it is less and less common to see the old-fashioned moderate social drinking actually taking place.”

But it is very clear which side is gaining the upper hand at present.

* For two months last year, out of curiosity, I did an exercise to record all the different beers I drank. Totalling these up, it revealed that I consumed 34 pints in pubs in November, and 38 in December. However, October would certainly have been higher, as it included trips out to Birmingham and Leicester, and showing the Southworth brothers around the pubs of Stockport. Given that I would also have consumed a fair bit more during holiday weeks, that’s consistent with 600 a year. The results of the exercise showed a staple diet of Old Brewery Bitter, Lees Bitter, Holts Bitter and Robinson’s Unicorn and Wizard, interspersed with a few other beers (and one solitary pint of Draught Bass) and so weren’t really very illuminating.

Posted by Curmudgeon at 1:17 pm