The future’s so bright you gotta drink keg 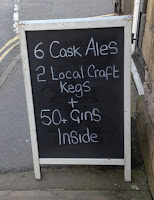 Twenty years ago, if you were after “interesting” home-grown draught beer in the UK, cask was the only game in town. However, since then there has been a steady growth in “craft keg”, to the extent that in some enthusiast pubs it is now the dominant or even sole dispense method. As Roger Protz reports, Adnams are saying that they expect keg production to overtake cask next year, while Dave Bailey of Hardknott Brewery asserts that the future really is in keg beer.

Now, I took issue with that in the comments. While I certainly have no objection in principle to drinking keg beer, I said “For British-style ales, cask, when done properly, is much preferable. To argue otherwise is to say that CAMRA has basically been barking up the wrong tree for forty-five years.”

However, it can’t be argued that keg, due to its longer shelf-life, provides the opportunity to offer drinkers much more choice of different styles and strengths. As Jonathan Adnams says in the article I linked to above,


There’s a lot of cask beer from micros – some of it not very good. At the same time, fewer people are going to pubs while some publicans are putting in a lot of handpumps to offer choice. The beer is often poor quality and drinkers won’t pay £4 for poor beer. They want reliability. Cask is now a lottery for drinkers.

Cask beer, by its very nature, is essentially a high-volume, quick-turnover product. It was ideally suited to the days when pubs were shifting huge quantities of Mild and Bitter, but is much less at home in a world where customers drink much less anyway while expecting a wider choice. As I’ve said ad nauseam on this blog, far too many pubs offer more cask beers than they have the sales to turn over properly, with the inevitable effect on quality. Even the pubs that do it well often give the impression of operating on the edge of acceptable throughput, especially early in the week. A lot of beer in GBG pubs is, while in no sense bad, not bursting with freshness. So maybe, if the future of draught beer is one of declining volumes and increasing expectations of choice, it is a keg future.

It has to be said that many bloggers who spend most of their time drinking in urban beer specialist pubs exaggerate the market penetration of craft keg. Yes, it’s certainly growing, but so far it hasn’t made much impact in “normal” pubs. Earlier this month, on our trip to Northampton, which by definition majored on beer-focused pubs, while most had one or two craft keg taps, there was only one – the Princess Alexandra – where it was at the centre of the beer offer, with cask as a “round the corner” afterthought.

Last week, I spent a few days in the more rural parts of South Wales, during which I visited ten different pubs. I wasn’t specifically looking for craft keg taps, but in all of them* the bank of handpumps remained the centre of attraction on the bar. There’s still a long way to go before craft keg replaces cask as the leading option for staple quaffing beers. It’s still something of an expensive, specialist product.

However, there are signs that things are changing. For example, the bar in the new The Light cinema in Stockport offers Camden Hells and Pale alongside one Robinson’s cask beer – Light Brigade on a recent visit. And I spotted the sign shown above outside a food-oriented pub in a tourist location in the Peak District. The tectonic plates are clearly shifting.

So maybe it’s time for CAMRA, if it wants to “do what it says on the tin”, to be more assertive in proclaiming that cask beer, when done properly, is better, rather than just weakly conceding the ground and muttering “well, a lot of that modern keg beer isn’t too bad either”. But, if people are served up with flat, warm, stale cask beer, you can’t remotely blame them for choosing keg in preference. Cask has no divine right to a place on the bar.

* There was one that was keg-only, but didn’t have any craft keg either, unless you count Marston’s 61 Deep, which strangely seemed to be the only “bitter” on offer. I went there for food, and actually had some keg Banks’s Mild.

Posted by Curmudgeon at 4:57 pm