Groundhog Day at the polls

This isn’t an overtly political blog beyond the sphere of lifestyle politics. However, for each major national election, out of interest I’ve run a poll on people’s voting intentions. Five years ago I published the results of the one on the 2014 European Parliament Elections. It’s fair to say that the outcome had been somewhat swayed by rather enthusiastic sharing by other people. 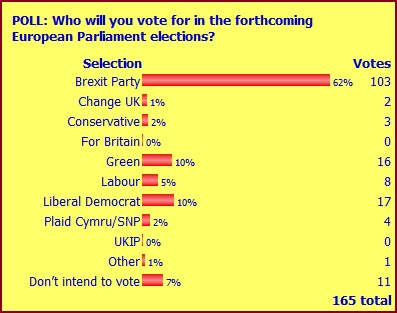 Five years on, and against all expectations following the referendum result, we have another round of European Parliament elections. The results of my poll are shown above – make of them what you will. I’m not aware of this one having been touted around to anything like the same degree. As a comparison, here are the results of one of the final proper opinion polls:

As it is not off-topic on this post, feel free to comment on the political issues, but please be polite and don’t throw a metaphorical milkshake (or brick) at anyone.

Note that I removed For Britain from the options shown in the sidebar, as they did not end up nominating any candidates, which I wasn’t aware of when I originally created the poll.

Posted by Curmudgeon at 8:17 am