Our next Beer & Pubs Forum Proper Day Out took us to the Warwickshire town of Rugby on Friday 3rd May. The home of the famous school may not seem the most obvious choice for a beery excursion, but we were assured it had a good and varied selection of pubs, and so it proved. Rugby is an interesting combination of genteel market town and more modern industrial centre, which perhaps adds extra interest to its pub scene. Now that there is an hourly service from Stafford down the Trent Valley line through Nuneaton, it’s easily accessible by train from Stockport, taking less than two hours. Paul Mudge, aka The Other Mudgie, had a 1970s CAMRA pub guide of Warwickshire, which showed the town being dominated by Ansells and M&B, but we didn’t see any evidence remaining of either their livery on the pubs or their beers on the bar. 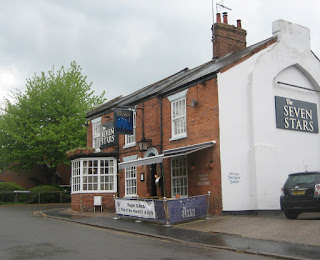 Our meeting point was the Seven Stars on Albert Square, which is actually a small cul-de-sac just north of the town centre. It is about fifteen minutes’ walk from the station, along a road that looks level on StreetView, but in fact climbs a noticeable gradient. Although it looks fairly small from outside, it has been considerably extended at the rear to provide a rambling interior with plenty of comfortable seating. A banner outside proclaims it was the local CAMRA Pub of the Year for 2017 and 2018.

It’s an Everard’s Project William pub, meaning that it has a wide range of guests alongside their own beers, making about ten cask lines in total. Those we tried included Everard’s old Original, Oakham JHB, Marston’s Old Empire, Titanic Plum Porter and Brit Hop King of the Kerb mild. The general view was quite favourable, but it has to be said that the mild, while in decent enough condition, was a touch thin and unmemorable. Although initially it took a long time for anyone to appear behind the bar to serve me, the landlord turned out to be quite chatty and gave us some tips about the other pubs in the town. The decorations include some vintage, and valuable, Worthington E toby jugs. 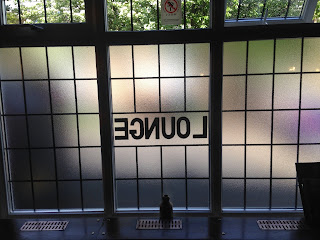 The Alexandra Arms on James Street was only a very short walk along a pedestrian cut-through passing some modern housing which had a plaque announcing it had won some kind of design award. It’s another outwardly small back-street pub that in fact has been considerably extended, with a couple of comfortable lounge areas at the front, and a large room at the rear with a pool table that is also used for live music. There were a group of youngish blokes in there who already seemed quite well-refreshed at 1pm. One of them chatted to us about the history of pubs in Rugby. “Are you the landlord?” one of us asked. “No, I’m just a dickhead”.

There were five handpumps on the first section of bar we came to. “Are there any more beers round the back?” “Hopefully not,” replied Martin Taylor, very conscious of the risk to beer quality from an over-extended range. Indeed there were, sensibly, only five beers. The pub is owned by the local Atomic Brewery, and the range included, alongside their own Strike, a number of guests including Titanic Plum Porter and Old Hooky. The Old Hooky came to the end of the barrel, but was cheerfully replaced by the Strike, which was pretty good. It was good to see the difference in price being automatically refunded, something you don’t always get when a beer is changed for another. Some gems on the jukebox, which may or may not have been selected by one of our party, included Si Tu Dois Partir by Fairport Convention, which I hadn’t heard for years, and Spirit of Radio by Rush. 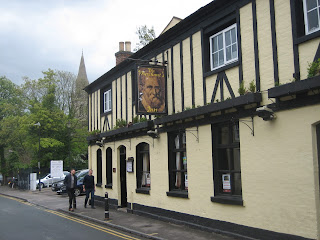 We then skirted the eastern fringe of the town centre and were confidently led by Martin along an unpromising-looking path beside a church to reach the Merchant’s Inn on Little Church Street, which is close to the famous Rugby School. It’s a mock half-timbered building which describes itself on its website as a “flagstoned gem”, which indeed it is, at least in the main bar area. It has an extensive, rambling interior which has been opened out somewhat, but includes a magnificent room at the rear with a gabled timber roof. Everywhere is festooned with breweriana, including the advertisement for Wilson’s brewery of Manchester shown below. 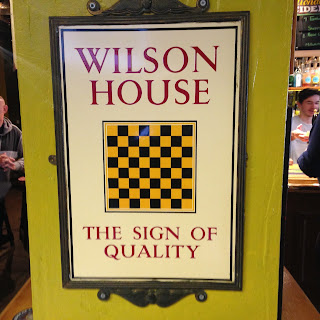 There were nine cask beers on the bar, including Wantsum Black Prince, Titanic Plum Porter (again), Box Steam Machine Head, North Cotswold Black Jack and Nethergate Venture. Possibly at lunchtime this was rather too many beers for the trade available, and my Venture seemed a little tired. The pub has a comprehensive menu of fairly straightforward pub food, from which we selected a mixture of burgers, steak, fish and chips and a sandwich, all of which came in generous portions and were well-received, the home-made oinion rings being particularly memorable. 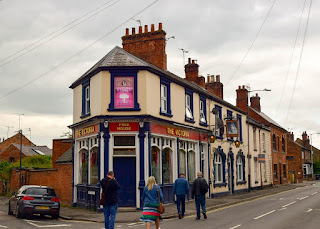 Another dubious-looking cut-through eventually took us to the busy Clifton Road, one of those characteristic just-off-the-centre shopping streets lined with curry houses and Polish grocers. This led us to the Victoria on Lower Hillmorton Road, a classic large back-street pub in the angle of two roads. It has a spacious, comfortable lounge to the right, and a basic public bar with pool table in the apex of the building, where we went. We were welcomed at the door by one of my favourite pub signs. 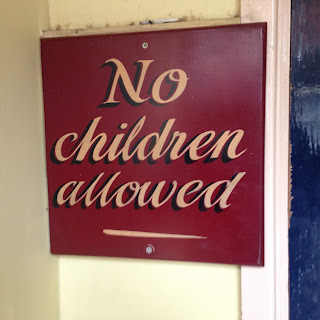 This is another pub owned by Atomic Brewery, and it had a couple of their beers on, Strike and Mosaic, alongside guests including Hooky Norton Hooky (which was pretty good), Adnams Ghost Ship and, yet again, Titanic Plum Porter, which so far had been a fixture in every pub we had visited. The music choice was what could best be described as “contemporary ballads” (oh for Ann Wilson to blow them away without the assistance of AutoTune) and this proved to be the first of several pubs screening the England vs Ireland one-day cricket international.

Thanks to Peter Allen of Pubs Then And Now for the external photo of the Victoria – all the rest are my own.

Posted by Curmudgeon at 4:08 pm