The house that craft built 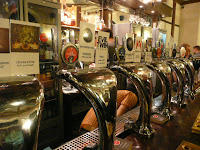 Oh no, you might think, not another post about craft beer. But what I’ve been thinking is that “craft beer” is basically an attitude of mind, not a product as such. Real ale is a specific, clearly-defined product. Either a pub sells it, or it doesn’t. Over the years, many pubs have appeared in the Good Beer Guide that only served a single real ale, and some still do. Many of those will have nothing else whatsoever to interest the “discerning” beer drinker.

But put a single keykeg tap in a pub (as if that actually happens) and it doesn’t immediately become a craft beer outlet. The craft ethos requires a single-minded approach to the whole beer offer – the bank of handpumps offering RedWillow, Thornbridge, Summer Wine, Magic Rock, the long line of keg taps, the fridge full of US imports, the blackboards, the bare floorboards, the uncomfortable seating. Plus the inevitable invasion of pretentious hipsters*. While they don’t do cask, BrewDog have the concept off to perfection. And, when I read about that type of outlet, I start dreaming of shabby keg-only Sam Smith’s boozers with frayed bench seating.

In the future we are likely to see an increasingly eclectic choice of beers available on keg in pubs – mostly lager, but so some extent ales too. But the full-on “craft beer bar” will remain essentially a specialist experience confined to city centres and affluent suburban enclaves where there is the clientele to support it. Real ale can take over (most of) the pub world; “craft beer” never will. And what will remain once the trendy beer fad has passed?

* #12 seems to be drinking beer. But does he really represent your desired type of bar clientele?

Posted by Curmudgeon at 4:28 pm