In the early days of CAMRA, Donnington Brewery in the Cotswolds was widely seen as the ideal of the small, rustic, country brewery. The brewery stood in a picture-postcard location by a pond with a watermill, it brewed some distinctive, although maybe a bit rough-edged, country beers, and had a small estate of classic stone-built Cotswold pubs all within a few miles. It was owned and run by Claude Arkell, a member of the Swindon brewing family, as an individual sole trader – it wasn’t even a limited company.

In the early 80s, I lived for a few years in Surrey and so regularly travelled up to visit my parents in Cheshire. The Cotswolds were roughly half-way, and so it often seemed a good idea to stop off at a Donnington pub for a pint and a bite to eat. The Coach & Horses at Ganborough, on the A424 just north of Stow-on-the-Wold, very close to the brewery, was a particularly convenient location. They used to do a very good Stilton Ploughman’s.

Over the years, I managed to visit 12 of their original 17 pubs, which must be the highest proportion for me of any brewery in the country. I’ve been to four or the original “Bathams Eight” and, over a long period of time, have been in about half of Robinsons’ much larger tied estate, but that remains a personal record. Since then, they disposed of two of the 17 – the Bell at Winchcombe and the Merrymouth Inn at Fifield – leaving 15, of which I have visited 11, or 73%. 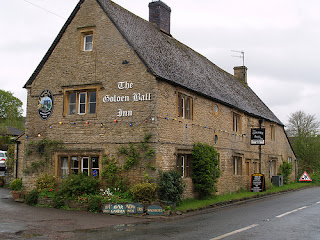 The pubs were mostly venerable buildings of Cotswold stone, and had a distinctive, welcoming, down-to-earth atmosphere with beer prices well below the local average – this in an area noted for its snobbiness and wealthy residents. The picture on the right is the Golden Ball in Lower Swell. However, it seems that in the 1960s Mr Claude was bitten by the modernity bug, and many of them had been opened out and furnished in a faux-rustic style with wobbly-edged tables that even in the early 1980s seemed very dated. The Black Bear in Moreton-on-Marsh was particularly notable for this.

Also they had a flirtation with keg (or probably top-pressure) beer that persisted into the CAMRA era. The beers were the rare Mild, the “ordinary” BB and the “best” SBA. They were good, enjoyable beers, but, as said above, maybe a touch rustic and artisanal. In itself, that is no bad thing, but they were never going to be the best beers in the land.

I moved back to the North-West at the end of 1984 and so wasn’t passing through the Cotswolds so regularly, but I’ve tried to make the effort to visit at least one Donnington pub if in the area. For a time they seemed to have something of a beer clarity problem – I remember one particularly hazy pint in the Mount Inn at Stanton – but this appears to have been resolved, and my most recent example was fine.

In the past few years they have largely dropped off my radar, and I included them in this blogpost amongst the list of family brewers now largely ignored by CAMRA. Their pubs also feature much less in the Good Beer Guide than they once did. However, in the same week Tyson posted a review of bottled Donnington Gold, which alerted me to the fact that they had now entered the Premium Bottled Ales market. They have always brewed the old-fashioned half-pint bottled beers for their pubs.

A bit more digging revealed that they now have a website, although they haven’t yet made an appearance on Facebook or Twitter. Claude Arkell died in 2007, and the business has passed to two of his cousins, who seem to have cautiously taken a more enterprising approach. They have acquired three additional pubs just outside the fringes of Donnngton’s original trading area, and have introduced an additional beer in Donnington Gold.

I still have a little booklet from the early 1980s entitled “Donnington Brewery and the 17 Cotswold Inns”, illustrated with black-and-white photos which, from the cars depicted, probably date back at least a further ten years. It’s accompanied by a foldout map which, bizarrely, lists the pubs at the bottom with grid references, but doesn’t actually show them on the face of the map itself, so I have written them in myself by hand.

It’s a pity we don’t have more small, quirky country breweries with their own distinctive, tight-knit tied estate, whose beers can only be found in their home territory and don’t turn up in every multi-beer pub the length and breadth of the country.

The Donnington Way is a walking trail connecting all the pubs. The Wikipedia article says that “a ‘Donnington run’ means visiting all 15 pubs in a single evening.” Hopefully with a designated driver!

Posted by Curmudgeon at 4:19 pm