Have we reached Peak Craft? 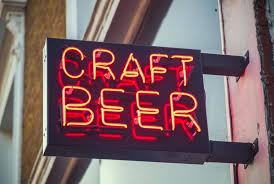 The Morning Advertiser reports that the craft beer sector has started to see a decline in sales. This has started with packaged products, which have fallen by 9% in the past year, and is expected to spread to draught within the next couple of years. This was only to be expected, as craft beer, insofar as it applies to the general beer market rather than just enthusiasts, has always given the impression of being something of a fashion rather than a genuine revolution.

“We have seen for a while that craft has been pushed into outlets it isn’t right for,” says the article, and that is exactly what has happened, with pubs putting a craft tap on the bar but finding few takers for it, while supermarkets have jumped on the bandwagon and been left with a lot of out-of-date stock. The typically high prices aren’t going to help, either.

It’s doubtful how many people actually identify themselves as “craft beer drinkers” rather than just consumers of a particular product. Do they see something like Camden Hells as a craft beer, or just an upmarket type of lager? While the concept of “craft beer” has become established in the public mind, it’s generally seen in a derogatory way as something associated with hipsters, high prices and weird flavours. Beyond Punk IPA, how many craft beer brands could the average person in the pub actually name?

It’s also notoriously hard to define, with most of the major brands being produced by offshoots of the international brewers, or other substantial companies, and often not really being considered genuine craft beers by the most vocal evangelists for the category. And does it include cask, or are the two mutually exclusive? If it does, how do we know which cask beers qualify and which don’t?

I’ve made the point before that, once the craft beer wave has exhausted itself, some of it will be absorbed into the mainstream, some will live on as a niche product that is irrelevant to most drinkers, and some will wither on the vine. And what we are seeing is that the likely legacy of craft is that many pubs will offer a hoppy keg IPA as part of their beer range, of which Punk IPA is the prime example. Maybe Punk will come to be a category-defining beer in the way that Guinness is.

On that subject, James Watt of BrewDog has made the claim that IPA is likely to overtake lager in popularity within the next 10-15 years. I have to say that sounds extremely unlikely, and comes across more as an example of the company’s typical headline-grabbing approach to publicity. In any case, the broad category of lager covers a wide range of styles, while surely IPA is just one sub-set of the general category of ale.

Someone made the point that bitter superseded mild, and lager superseded bitter, so why shouldn’t IPA then supersede lager? However, those changes occurred in a British market that was largely isolated from the rest of the world. Pale lager has conquered the world, and in some form is now the staple beer in every major country. The UK and Ireland were about the last holdouts against that trend. Beer has now very much become an international market, and no country can completely stand aside from it.

One of the key attractions of lager is that it offers a cold, refreshing, undemanding drink in hot climates. It’s very hard to imagine IPA, which is typically associated with astringent hoppiness, as taking over that role. And, even if it did, surely the undemanding 3.5% keg IPA that took the place in the market currently occupied by Bud Light would be precisely the kind of thing that CAMRA was initially set up to oppose.

IPA may indeed become more popular worldwide in the coming years, very often by displacing long-established local lager styles. But the idea that it is going to eclipse lager in popularity simply isn’t credible.