A stroll around Shifnal - Part 1

Our latest Proper Day Out organised through the Beer & Pubs Forum took us on Friday 22 November to the small Shropshire town of Shifnal. On the face of it, this may seem an unlikely destination, but it has a couple of attractive-sounding Good Beer Guide entries, on top of which research revealed a number of other pubs that sounded worth visiting, plus it’s easily accessible by train. I’ve occasionally driven through it and been struck by the number of pubs on the road (Broadway) leading north from the town centre, even though it’s not a main shopping street, but I had never actually visited any of them before. We were joined for the first time by Paul Bailey, author of Paul’s Beer and Travel Blog, who had travelled all the way from Tonbridge in Kent. Paul has produced a summary of the day here. 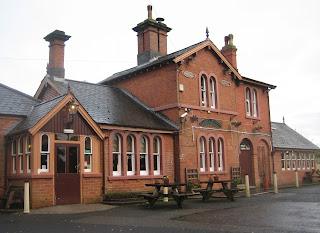 We broke our journey from Wolverhampton at Codsall to call in at the Station Bar, which occupies the former station buildings and has fairly recently been converted to a pub by Black Country brewers Holden’s. Although just outside the city boundary, Codsall is basically a suburb of Wolverhampton, and there are plenty of nearby houses to provide custom. It offers a spacious and tastefully-decorated interior, with a central bar area with a real fire, a cosy lounge are to one side with extensive bench seating, and a conservatory extension on the other side giving a good view of the passing trains.

There were the standard Holden’s beers on the bar – Mild, Bitter, Holden Glow and Special Bitter - together with a couple of guests from other local brewers in the shape of Enville White and Salopian Oracle. We were told that the much sought-after Old Ale would be available nearer to Christmas. All the beers we sampled were very good, despite in most cases being the first served that day, and my pint of Bitter was everything a classic “ordinary” should be. 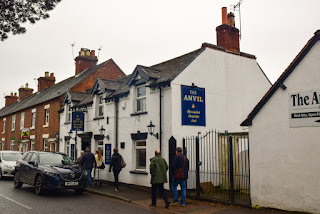 The timetable allowed us a fairly leisurely drink before boarding the train for our short onward journey to Shifnal. The route runs past Cosford Aerodrome, now home to the RAF Museum. At Shifnal, a back exit from the station provided a short cut to our first pub, the Anvil. This whitewashed pub has recently been acquired by Black Country Ales and refurbished in their characteristic style, with a rambling interior offering a variety of cosy area. It was fairly busy just before 1 pm, with a number of groups eating.

On the bar were the usual BCA offerings of BFG, Pig on the Wall and Fireside, together with a number of guests including Enville White, Nailmaker Mild and Gothic Stout, and Green Duck Megalomania, together with a couple of real ciders. All the beers we sampled were in decent nick, but I have to say my Pig on the Wall was rather lacking in distinctive flavour and not a patch on the quality of the Holden’s. While BCA do a very good job with the fabric of their pubs, unfortunately they often suffer from the twin problems of having too many beers on the bar and their own ales being a touch lacklustre. 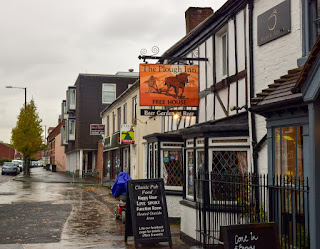 The rain was just setting in as we doubled back down Aston Street, passing the Winking Frog, which had been deleted from the itinerary due to reportedly not selling cask beer. However, peering in through the window, we spotted a pump for Wye Valley HPA, but it didn’t really look the kind of pub we wanted to squeeze in. Reaching the main street, we turned right to bring us to our next destination, the Plough, which was our scheduled lunch stop. This is an outwardly small terraced pub with a half-timbered frontage, which in fact runs a surprising way back from the street, reflecting the depth of the burgage plots of the mediaeval town. The interior has been opened out but retains a choice of different areas with plenty of old beams and flagged or wood floors.

Beers on the bar included Dark Star APA, two Citras – Oakham and Dark Star Hophead – Hobsons’s Mild and Bitter and Enville Ginger. Again all the beers chosen were pretty good. From the extensive menu, several of us were tempted by the Fish and Chips which was offered with a discount for two meals, one other person instead choosing the lasagne. The food, like the beer, was good, and the friendly and attentive service from the barmaid who also doubled up as waitress deserves a mention. 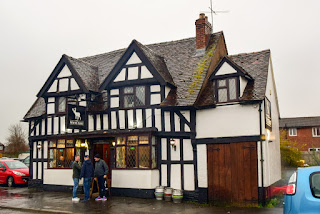 Heading further up Broadway and High Street in the steady rain, we passed the closed Beehive on our right to reach the White Hart, which was the northernmost pub on our list. This is an attractive old half-timbered building claiming to date back to the 17th century. Inside it retains a traditional two-bar layout, with carpet on the floor in both rooms rather than trendy bare boards. Although it was now approaching 3 pm and lunchtime food service had ended, there were still a fair number of customers, including a group playing cards in the public side.

The door to the lounge was not a self-closer, so we were told to shut it behind us when we walked in. Beers available, split between the two bars, included Enville Ale, Abbot Ale, Wye Valley Butty Bach and HPA, and Holden’s Mild. Enville Ale, which is a personal favourite anyway, did not disappoint, although opinions were divided about the Mild. On reflection, I think of all the pubs we visited in Shifnal this would be my first choice to drink in in terms of its overall atmosphere.

Thanks to Peter Allen of Pubs Then And Now for the photos, with the exception of that of Codsall Station Bar, which is my own.