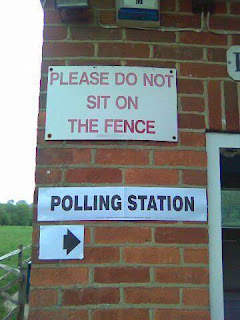 Today we are going to the polls in a general election for the third time in less than five years. As on previous occasions, I created an opinion poll in the sidebar, which I have also mentioned in the text of posts for those reading the blog on a mobile device. The results are shown below. 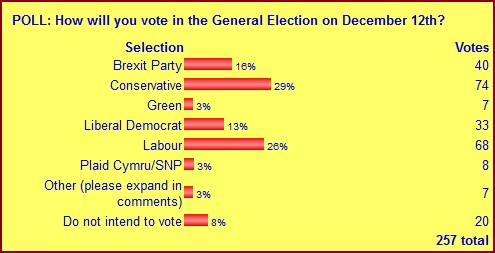 The poll was created before the announcement that the Brexit Party were not going to contest any Conservative-held seats, so the results won’t be representative of the likely outcome. However, given that a large number of people had already voted, I didn’t think it appropriate to start again from scratch. The original poll together with the associated comments can be seen here.

Running these figures through the Electoral Calculus model, and eliminating the others and non-voters, gives the following numbers of seats, and surprisingly produces a slender overall Conservative majority of 10, and no seats for the Brexit Party on a 17% vote share.

This is actually not all that different in terms of seats from the latest YouGov MRP projection, which was pretty accurate in 2017.

The results of the final YouGov MRP model for #GE2019 are now here:

Tonight is the monthly meeting of the local CAMRA branch, at which I will be presenting a Christmas quiz. 27 years ago, in 1992, the two events (well, not the quiz) also coincided, and that election rather confounded the predictions of the pollsters. We’ll find out in the small hours of tomorrow morning whether that has happened again.

As I said last time, I’m not aware that lifestyle issues have featured at all in the campaign. Sadly, it seems that, whoever gets into power, more things will be banned or restricted.

Posted by Curmudgeon at 8:01 am