Although some pedants would argue that it doesn’t actually happen until the end of next year, this month marks the end of what has proved to be a momentous decade in British history, although possibly not quite so much in the sphere of beer and pubs.

Looking back through my posts in the first couple of months of January 2010, it seems that what was most concerning me was the rise in anti-drink sentiment. I was also criticising CAMRA for barking up the wrong tree. So nothing much has changed there. Home Office minister Gillian Merron was delusionally claiming that the smoking ban hadn’t affected the trade of pubs. There was quite an outbreak of antismoker bigotry in the comments on that post, although I got the last laugh by pointing out in the final comment that she lost her seat at the general election a couple of months later. And the idea of a majority Labout government seems a world away now.

The number of pubs has continued to decline, although not at quite as steep a pace as in the final couple of years of the 2000s, with quite a number of prominent closures. More recently it has levelled out somewhat, and there have even been reports recently of a small increase in the total number, although this always raised a question of how exactly a pub is defined. A full on-licence is not an automatic signifier of pub status. The impact of closures has also greatly varied between different areas.

On the other hand, the decade saw a rise in the number of micropubs and other small new bars, made possible by changes in licensing law that made it much easier to open new venues. In general, these places aren’t really to my taste, and my feeling is that they represent a further fragmentation of the pub trade. The concept of “a pub” as something universally understood is looking increasingy dated.

In response to the fall-off in trade, many pubs cut back their hours, often no longer opening at lunchtimes, particularly early in the week. Even when they are open, outside the traditional busy times of Friday and Saturday nights pubs can often be embarrassingly devoid of customers. Going for a pint simply isn’t the part of everyday life it once was.

The British craft beer market grew in size and prominence, and the term entered the general vocabulary. However, nobody could agree on what it actually meant, and by the end of the decade most of its leading lights had been wholly or partly taken over by the international brewers. Pretty much all the beers on this list come from brewers either owned or invested in by the big boys, or from BrewDog, which is now very much a shark itself rather than a minnow. Craft’s lasting legacy seems likely to be the presence of a hoppy keg IPA on many bars.

Part of the craft beer movement was co-opted into a political campaign with the avowed aim of increasing diversity and inclusiveness in beer, although the actual results often seemed to tend more towards a shrill, humourless intolerance of different views and outlooks.

Wetherspoon’s apparently inexorable rise was stemmed by a period of retrenchment, although to some extent this was driven by wanting to escape from expensive leases. They realised that two sites fairly close to each other in the same town would just cannibalise each other’s sales, and that some locations just didn’t suit their formula. They have now gone back to opening new pubs, but the figure of 1,000 that once seemed inevitable now looks a long way off. The company still accounts for more than one in ten pints of real ale sold in Britain, though, and remains a bellwether of what is hot and what is not in the beer market.

There were further steps in the unceasing war against smoking and smokers, including a display ban and plain packaging, together with ever-increasing duty levels. However, despite many warnings, little of this seemed to be turned in the direction of alcohol, with very little being done to increase duty, curb availability or restrict advertising and promotion. Ironically, much of the ire of public health seems to have been redirected against “junk food” and soft drinks, with the introduction of the controversial and ineffective sugar tax. However, the general climate of public opinion has become much more censorious about alcohol, and stricter anti-drink measures certainly cannot be ruled out in the next decade.

The trend in pub refurbishments very much tended towards a stripped-back, minimalist, pastel-shaded “Farrow and Ball” style. The removal of carpets, bench seating and warm colours resulted in a harsh, echoing atmosphere offering little in terms of comfort and cosiness.

One of the worst offenders have been my local family brewer Robinson’s. The news that they are refurbishing a pub is enough to fill the heart with dread. Perhaps more than any of their competitors, they have carried out a root-and-branch reassessment of their business, involving refocusing on smart food-led pubs and getting rid of most of the smaller wet-led locals. Over the decade they must have sold off around a third of their estate.

They also withdrew 1892 Mild (formerly Hatters), which as recently as 1977 had been their best-selling beer. Given that all their local competitors still make cask mild, this was essentially a symbolic gesture that they were turning over a new leaf. Of course, they are a commercial company and are fully entitled to make whatever decisions that want to ensure their future prosperity, but it all leaves a rather sour taste in the mouth. On the other hand, they have enjoyed great success with their Iron Maiden themed beer, Trooper, which has now become a mainstay of their business.

Hydes retrenched their brewing operations and moved to a new site in Salford in 2012. Of the other local family brewers, Holts are the ones who seem most committed to running pubs with a substantial wet trade and actually shifting lots of beer.

Samuel Smith’s distinctive approach to running their pubs stands out from the crowd even more today than it did in 2010, but they have scaled new and sometimes counter-productive heights of eccentricity.

On a personal note, I lost both of my parents during the decade. However, as they would now be 101 and 97, it was only to be expected. It never entirely leaves you, though.

But I confidently expect this country to enjoy a bright future during the coming decade. And, while it cannot be denied that their role in society is diminished, there will still be good times to be had in pubs. Plus, taking a wider perspective, it shouldn’t be forgotten that the 2010s were a decade of significant global progress on most aspects of human wellbeing. 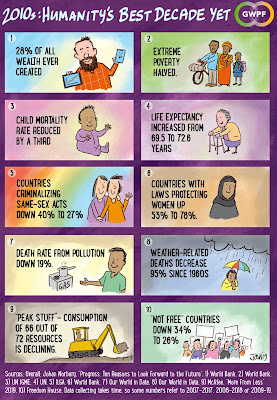 Here’s an article by Matt Ridley explaining the factual background behind the above graphic.