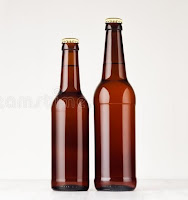 The current lockdown means that we’re reduced to drinking at home, if at all. The closest equivalent to the pub pint, at least in terms of volume, is the familiar 500ml Premium Bottled Ale, which fits comfortably into a brim-measure pint glass. OK, it isn’t an Imperial pint, but you can’t really get pint bottles of ale (lager, for some reason, is often sold in pint cans), and even if you could they would actually come right up to the brim. In fact, the typical pub pint, at least in the North, is probably closer to 500ml than 568ml. The Samuel Smith’s bottled beers, which are 550ml, certainly give you more beer than you would normally get in the pub.

However, in recent years 500ml bottles have steadily been losing ground to the smaller 330ml bottles and cans. Just three weeks ago (although it seems more like three years) we had a presentation at our local CAMRA branch meetings from representatives of Robinson’s brewery, who confirmed that the smaller size was where the growth was, while the 500ml bottles were in decline.

In particular, these have been taken up enthusiastically by the burgeoning craft sector. You won’t really find anything presented as “craft” in a 500ml bottle. Part of the motivation is to differentiate themselves from what are perceived as old-fashioned “boring brown bitters”. Plus it can’t have escaped their notice that they can get away with charging virtually the same price for a third less beer.

One argument advanced for smaller bottles is that they give the beer less chance to warm up, which is perhaps valid for chilled lagers, but hardly applies to ales and stouts. And they also allow you to try more different beers for the same given volume. However, if all you want is *one beer* while you’re sitting back to watch yet another rerun of Inspector Morse, and are happy with something familiar and trusted, that’s irrelevant.

I can see the point of smaller bottles for especially strong beers, although where the cut-off point should be set is a moot point, and maybe for specialities that you wouldn’t want to drink in quantity. But, speaking personally, for normal quaffing beers they just aren’t enough, so I end up wanting two to feel that I’ve had a decent drink, which obviously means at the end of the day I have drunk more and spent a lot more. Obviously everyone’s free to choose whatever bottle size they prefer, but I really fail to see the attraction of the smaller ones. Fortunately, there’s still plenty of choice available in the larger and more pub-like size.