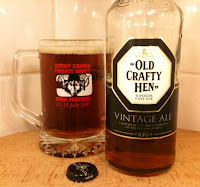 One of the reasons marketeers put forward for people buying premium bottled ales is to give themselves a treat. And a growing category that directly addresses this motivation is the “super-premium” extensions of existing brands, with ABVs well above 6%. One of the first of these was Greene King’s Old Crafty Hen, a very complex beer including a proportion of an oak-aged beer called Old 5X, and which retailed for an eye-watering £2.49 for a 500ml bottle (77p a unit). I have been very impressed with this, although the price means it can only be an occasional treat, and such a rich, multi-layered beer is one to be savoured rather than guzzled. I was much less impressed by the cheaper Abbot Reserve at the same strength (£1.99, 61p per unit), in which the distinctive slightly sour, bittersweet character of the standard Abbot Ale seemed to be overpowered by cloying sweetness.

I recently spotted Marston’s Pedigree VSOP at 6.7% ABV, retailing at £2.25 for a 500ml bottle (67p a unit). The bottle label says this “delivers a rich complex pale ale with an opulent and luxurious finish”. The one I sampled was distinctly lighter than its Greene King counterparts, but didn’t really seem to drink its strength, and – in common with several other Marston’s bottled ales – demonstrated poor head retention. There is another in the cupboard awaiting a second opinion. Another one from the Marston’s stable is Wychwood King Goblin (6.6%), which I haven’t tried yet, but which didn’t impress The Ormskirk Baron.

It’s interesting that nobody from the anti-drink lobby has yet seized on this phenomenon, as they surely would if Inbev came up with a 6.7% ABV Stella brand extension. But, on the other hand, the fact that these beers sell for more per unit than their lower-strength counterparts, and that ales of this strength tend to be too rich and heavy to drink rapidly in quantity, means that in reality they have little to worry about. This category does seem to be here to stay, though, and it will be interesting to watch out for the other major producers of premium bottled ales coming up with their own variations on the style.
Posted by Curmudgeon on April 24, 2010