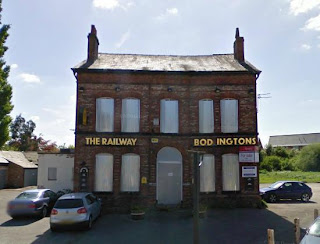 I was saddened to see recently as I was passing that the Railway at Heatley near Lymm was in the process of being reduced to a pile of rubble. I wrote about it earlier here. This former Boddingtons’ house had been a long-standing Good Beer Guide entry and was one of the very few remaining traditional, multi-roomed pubs in the area. The main bar, with fixed wooden benches lining the walls facing the counter, was one of the most congenial drinking spaces I knew. And that particular part of the pub had been non-smoking by choice long before the ban. Most pubs I know that have closed have, to be honest, at least in their latter days, been pretty dismal. But this had been a damn good pub almost to the end. It featured in the 2008 Good Beer Guide, which was published at pretty much the same time as it closed.

It closed its doors forever in the Autumn of 2007 (I wonder what could have happened earlier that year to cause that – Ed). For a while it featured in the sidebar as a touchstone of whether we were going to see any kind of revival of the pub trade. But, despite being situated in a prosperous area with no shortage of nearby housing, it was not to be. None of these people who are always bleating about what great opportunities there still are in the pub trade were prepared to put their money where their mouth was and take it on. Now any chance of that happening has gone. Outside the urban bubble, this is the reality of what is happening to so many pubs in the wider world.
Posted by Curmudgeon on November 12, 2011