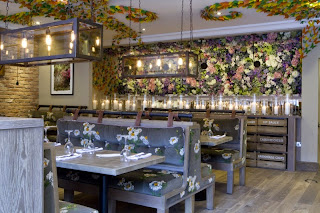 Going back forty years or so, Robinson’s brewery seemed to have been afflicted by a virus for drastic, then-trendy pub refurbishments. These had no regard to the pubs’ traditional character and typically involved severe knocking through, “Spanish arches”, white artexed walls, 24-panel glass doors and low, lounge-style chairs. Fortunately, they eventually came to their senses and began carrying out sensible, tasteful updates like that of the Railway at Rose Hill, Marple.

But, more recently, a new generation of Robinsons has taken over, and they have started to take a more drastic approach. For a start, they have closed down a substantial number of their under-performing pubs, as I described here. Now, I’m the last person in the world to expect breweries to keep pubs open that they don’t see as viable, and Robinson’s haven’t applied restrictive covenants to any of them, but even so it’s a clear statement of intent.

They have also been taking a very consciously un-traditional approach to pub refurbishments, and seem to have completely jumped the shark with what has been done to the Farmer’s Arms in Poynton (which I have to admit I have never actually been in before or after).


Upon entry you are greeted by the gaze of Ermantrude, a full-size fiberglass cow. Hand painted, her floral design emulates the upholstery that adorns several new seating areas and is a taster of what awaits.

Elsewhere, customers will be charmed with a flutter of butterflies across the ceiling and a pantheon of cascading flowers that seemingly grow from the walls creating a theatrical focal point that has never before been seen in a Robinsons pub...

Major structural work has also taken place with the addition of an impressive orangery. New wallpaper, which resembles the shadows of trees, covers the walls of the new extension and seems to move with each cloud that passes overhead.

Nurse, nurse, the smelling salts please! The illustration looks as though someone has thrown up all over the wall and ceiling.

In the 60s and 70s, the then Watney Mann employed an interior designer called Roy Wilson-Smith who carried out some quite bizarre internal refurbishments that made drinking in a pub seem more like being in the jungle or a grotto. It seems that his spirit is alive and well and stalking the Robinson’s estate.

I’m sure I’m not alone in finding what has been done to the Farmer’s Arms a load of fashionable, pretentious twaddle that shows zero understanding of or sympathy for the concept of “pub atmosphere”. It’s the kind of trendy nonsense that CAMRA would once have had the guts to roundly condemn but will probably now praise as “bright and contemporary”. Will people never learn that what seems modern and cutting-edge today will look sadly dated in a few years’ time? 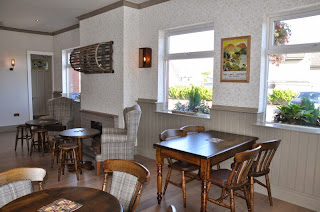 Browsing through Robinson’s website, I also came across this description of the refurbishment of the Crown on Walney Island in Furness, where the illustration (right) comes across as just the kind of deliberately uncosy, cold-coloured pub interior that I was complaining about here. It says it uses “a palette of light, neutral colours”, which is just what you don’t want to see in a pub, where colour schemes should be rich and warm.
Posted by Curmudgeon at 11:29 am