I was recently going through my late mother’s effects* and came across this typed menu from the Old Vicarage Hotel at Stretton in Cheshire. From the combination of date and day it dates from either 1979 or 1984, but I strongly suspect the former.

It’s very much a sign of a bygone era. The lack of floweriness and pretension in the food descriptions is notable – if you have to type it out, you can’t afford to be too verbose. Also there’s a complete absence of a vegetarian option. Rainbow Trout Cleopatra – which is what I would probably have chosen on that occasion – doesn’t involve asp venom or asses’ milk, it’s just served with herring roe and capers.

Hotels don’t tend to be seen as such desirable dining venues as they once were, and this one has long since been completely rebuilt and massively extended as the Park Royal.

* Don’t worry – she in fact passed away last year, but I’ve only just got round to getting my old scanner working again 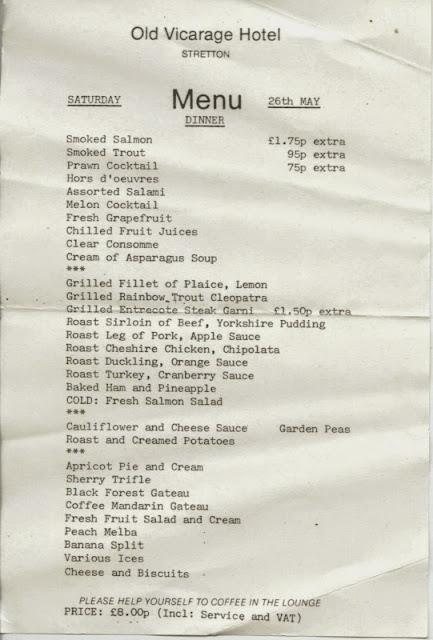