In the air tonight 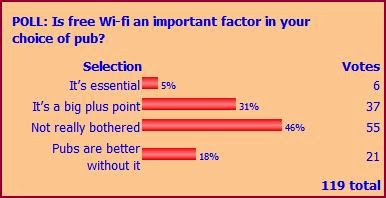 With an impressive 119 votes, the poll on wi-fi in pubs shows almost two-thirds (64%) either being indifferent or seeing its absence as a positive, and only 36% considering it a must-have or highly desirable feature. The point of asking this question is not to criticise its presence as, after all, unlike such things as loud music or screaming children, it scarcely impinges on other customers, but rather those who see pubs as simply a list of “facilities” and feel aggrieved if one lacks the particular feature that interests them. Surely it’s a good thing that pubs aren’t all the same.

On a recent pub-crawl of Edgeley, one of the more down-to-earth parts of Stockport, one fairly traditional pub was advertising free wi-fi as you went in through to door, so obviously it’s becoming pretty commonplace. However, I have to say that (perhaps because I am short-sighted) that browsing the internet on a smartphone cuts you off much more from what is going on in the rest of the pub than reading a newspaper, so possibly to some extent it might promote disconnection and social isolation.

Posted by Curmudgeon at 4:32 pm