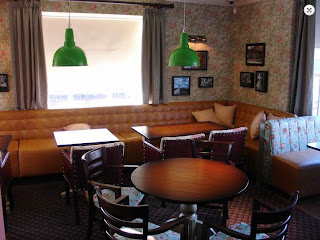 Last year, I expressed concern that Holt’s were planning to convert the Cheadle Hulme pub in the suburb of the same name to a “family dining venue”, and expanded on this in my Opening Times column.

The work has now been completed and the pub reopened as Platform 5 this Monday. The name comes from it being situated next door to the station, which has four platforms because it is in the fork of two lines. I put my head round the door to take a look and have to say it has turned out a lot better than was feared. I’m not sure whether it was always going to be like this, or whether they tweaked the concept somewhat in response to local concerns.

It’s certainly not a family dining pub of the Hungry Horse type, being a notch or two more upmarket in both its menu and general style. The pub is split into two halves, with that on the left being in café/restaurant style, and the right being more conventionally “pubby”. Between the two is a “waiting room” with high seating and a screen showing departures from the station. However, all the TV screens showing Sky Sports have been removed from its previous incarnation.

As the photo suggests, while it does have the usual contemporary style touches such as a lack of beermats, scatter cushions and meals served on chopping boards and roofing tiles, it does retain extensive bench seating and generally makes use of warm colours – reds and browns. While obviously mainly food-oriented, it’s certainly somewhere you could happily just sit and have a drink, and to my eye is a more congenial pub interior than Holts’ other two recent upgrades – the Five Ways in Hazel Grove and the Griffin in Heald Green.

The old pub sold a couple of guest ales and beers from Holts’ Bootleg micro-brewery, but the selection has now been pared down to their mainstream range – Bitter, IPA and Two Hoots – although it was good to see the IPA beng replaced by Mild when it went off. Possibly they will have the two on rotation. The beer names are hand-chalked on pumpclips like little blackboards.

There’s an extensive food menu of the kind of sub-gastro type often seem in such places. For pub food it’s not cheap, with most main meals some way over £10 – if you want a cheap lunch you would be better off in Wetherspoons’ King’s Hall just down the road. It also seemed to suffer from the common problem of “chips with everything”, served, of course, in a little basket of their own. And yes, there were at least a couple of pulled pork dishes.

It’s also worth mentioning that the male bar staff seemed to be decked out in hipster uniform, with beards and check shirts, the lead barperson sporting particularly impressive ginger facial hair.

Not my kind of pub by any means, but it could have been a lot worse and, unless you really hanker after Spoons’ beer range, probably the best on offer in Cheadle Hulme.