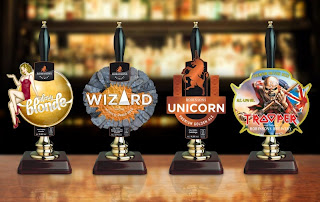 At the end of last year, I reported that Robinsons had announced they were going to axe their 1892 Mild. The general verdict was that, while it was sad, the decision was understandable in view of plummeting demand, and nobody was going to be staging protest marches.

At the time, they said they planned to introduce a new 3.7% amber beer, not as a direct replacement for 1892, but to plug a gap at the bottom end of their range, something that caused many beer enthusiasts to yawn a little. This has now appeared in the form of Wizard, which did not greatly impress RedNev when he came across it. In the first two months of the year, Robinsons produced a seasonal beer called Mojo, which was also 3.7% and was thought to be a trial run of Wizard.

However, in fact Wizard is noticeably different, being paler, dryer and a little lighter on the palate. Robinsons say that they “have combined 5 English hops, pale, wheat & crystal malts to produce Wizard, a moreish, sessionable 3.7% ABV mythical amber ale. Packed full of flavour, Wizard has a spell-bounding fruity & zesty hop palate complemented by a magical full malt character.” Fair enough, but perhaps a touch of hyperbole for something that is basically an “ordinary bitter”.

As I said, it’s fairly dry, mid-amber in colour (a little darker than Unicorn), with a touch of the distinctive Robinsons house character and a good balance of malt and hops. It’s never going to set the world alight but, there again, that isn’t the point of ordinary bitter. Where available, it will probably become my usual drink in Robinsons pubs unless there’s a particularly interesting seasonal beer.

Historically, Robinsons have been in the unusual position of selling a “best bitter” as their everyday quaffing bitter. They weren’t alone in this – for example, Camerons Strongarm was their staple beer in the North-East, while the weaker Bitter was favoured in Yorkshire, Draught Bass and Marston’s Pedigree were both often the staple beer across large swathes of the Midlands, and in the South-West many breweries offered a “best bitter” at around 4.2%, and a “boys’ bitter” around 3.2%. But it was pretty much unique in the North-West.

Many people, unaware of the relative strength, used to complain that a night on Robinsons Best Bitter gave them a “bad head”, when in fact it was markedly stronger than most of its competitors. They did produce a weaker version at about 3.5%, just branded as “Bitter”, but for whatever reason it was only available in a handful of outlets, including locally the Queens in Cheadle. This was relaunched as “Old Stockport” at the same time as Best Bitter became Unicorn, but never really gained much favour and was axed a few years ago. They did introduce the 3.8% golden ale Dizzy Blonde, which can be very enjoyable when well-kept, but it has never claimed to be an ordinary bitter and indeed often sells at a premium to the stronger Unicorn.

But it seems a sensible move to launch a lower-strength ordinary bitter that will also allow Robinsons to be more price-competitive in many of their pubs where they have been struggling a bit. Then Unicorn can be repositioned as a premium beer going head-to-head with the likes of Wainwright and Doom Bar in the free trade. And it has a very recognisable brand name.

There is one worry, though. Historically, breweries in the North-West have always struggled to sell a bitter-style beer that is weaker than their standard beer, especially if the latter is automatically proferred when a customer just asks for “bitter”. Sam Smith’s Tadcaster Bitter is a prime example and, more recently, Holts IPA. The other day I was in a Robinsons pub serving a very decent pint of Wizard, but where an old boy went to the bar asking for bitter and got Unicorn. Unless Wizard overcomes that hurdle it is likely to struggle, although I’m sure the price differential will help.