The top and bottom of it 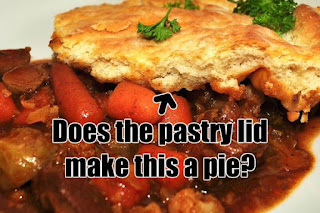 For many years, pubs have had items on their menus that are described as “pies”, but which in fact are stews or casseroles with a pastry lid. A growing number of people have been concerned that these dishes do not really qualify as pies. Indeed, a petition to Parliament was created on the subject, which only fell because of the general election. Obviously this was a bit tongue-in-cheek, but it’s clearly something that people have strong feelings about.


Make wrongly describing a casserole with a pastry lid as a pie a criminal offence.

For too long customers in pubs and restaurants have ordered what is described on the menu as a pie only to be served with casserole in a pot covered by a puff pastry lid. This is not a pie and is also curiously difficult to consume. A pie is defined by the OED as "A baked dish of fruit, or meat and vegetables, typically with a top and base of pastry." This petition urges the implementation of criminal sanctions upon the owners of food outlets that serve items described as pies without a pastry base. Exemptions will apply for Shepherds, Cottage and Fish Pies.

A week or so ago, there was an article on the Morning Advertiser website celebrating the rise of pie sales in pubs, on which I commented that the illustration wasn’t actually a pie. This reignited the debate on Twitter, with Boak & Bailey pointing out that many of Mrs Beeton’s pie recipes did not specify a bottom layer of pastry. Those layers of fowl, ham, forcemeat and hard-boiled eggs sound really appetising. 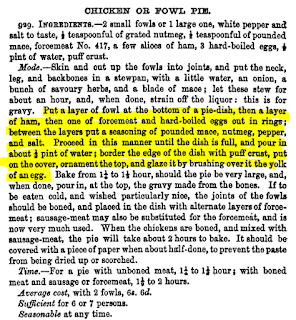 So, in conjunction with Mark Wadsworth, I decided to create a poll on the subject. With an impressive 146 votes, the results show just over three-quarters in favour of the proposition that a pie needs a pastry base as well as a top, but on the other hand a significant minority taking the opposite view.

Personally, I’m not really bothered, as I don’t like “gravy pies” anyway, although I love a proper solid pork pie, preferably with jelly. But it obviously grinds many other people’s gears.

The original poll results can be seen here, which also shows some interesting comments.