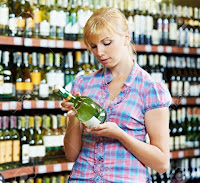 A frequent demand from anti-alcohol campaigners is that supermarkets should have dedicated alcohol checkouts, rather than allowing drink to be included within the main family shop. The key argument behind this is that seeing drinks on sale encourages people to buy more than they otherwise would, but the evidence behind this is very questionable. Over the past fifteen years, we have seen a substantial increase in the apparent availability of drinks, but on the other hand a significant reduction in overall consumption. It may lead to people buying different products, but it doesn’t make them buy more.

I remember when it was always the case that alcoholic drinks were sold via separate counters, either dedicated off-licences or sited within supermarkets. The first time I saw drinks being stocked on the normal self-service shelves was in the early 80s. But I don’t think this was due to a change in the law, but more to the realisation that supermarket shoppers were increasingly picking up drinks as part of their weekly shop. It was no longer the responsibility of the male of the household to make a separate visit to the offie.

Creating a separate drink sales area and checkout would not be too challenging for the typical supermarket. In fact, the giant Morrisons at Hollinwood, Oldham, seems to have been laid out with that in mind. I’ve joked on Twitter that it would help me do my shopping without having to queue behind people buying vegetables and nappies. Realistically, it would make no difference to drink sales and maybe even make life more convenient for some.

Would the alcohol section be prevented from selling related products such as bottle openers, corkscrews, crisps, nuts and scratchings? Even in the old days, the classic “offie” used to stock things like that, plus sweets and chocolate bars. And surely it would be unreasonable to apply this to convenience stores of under 3,000 sq ft, where it would simply be impractical.

So the conclusion must be that this is another example of pointless gesture politics from the anti-drink lobby, that would make no difference in practice except to subtly advance the denormalisation of alcohol. In reality you would have to have a dramatic reduction in availability to produce any decline in consumption. Availability follows demand, not the other way round.

A further thought is that tobacco products have always been sold through separate counters, which in the past were often combined with the drink counters. Is this a legal requirement, or just a recognition of the risk of theft from self-service shelves?