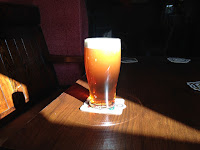 I’ve sometimes been accused on this blog of being an unpaid cheerleader for Samuel Smith’s Brewery. Now, I don’t think that’s entirely fair but, as with any other blogger, I give praise where praise is due. There’s much to criticise in the beer and pub world, so any positives deserve to be highlighted.

It’s not primarily for the beer, although Old Brewery Bitter is a distinctive, high-quality product that is much underrated. Given a free choice, I’d probably marginally prefer a pint of Lees Bitter or Robinsons Wizard or Unicorn, amongst beers widely available locally. And Sam’s single-beer cask range is a limiting factor, although it has to be recognised that the vast majority of real ale drunk is beers in the gold-to-copper colour spectrum and within a strength range from 3.5% to 4.5% ABV.

It’s not really the prices either. I’m not on the breadline, and to be honest paying an extra pound a pint for a few pints each week is not going to make much difference to my finances. I’d still go to Sam’s pubs even if their prices were on a par with the competition. But it has to be said that the low prices encourage custom, and a busy pub is always more appealing than a deserted one. And, particularly in their more rural pubs, the low prices produce a wider spectrum of customers.

No, what really makes the difference is the pubs. What I’m basically looking for in pubs is to be able to enjoy a quiet drink and chat in comfortable surroundings, and Sam’s deliver that much more reliably than any of their competitors. There’s no TV football crowding out everyone who isn’t interested, and no blarting piped music played for the benefit of the bar staff. I can’t recall a single example of a high-level posing table in a Sam’s pub, while bench seating and comfortable chairs are the norm.

In towns like Stockport, there’s still a scattering of other pubs of a generally traditional character that offer an alternative to Sam’s, even if they don’t tick every single box. But, in the more rural areas such as North and Mid-Cheshire, they really stand out as beacons of proper pubdom amidst a sea of gastro dining. For example, in the large village-cum-small town of Holmes Chapel, there are three pubs. One is a recently-refurbished, characterful Sam’s pub, the Swan. The other two are an Ember Inn and a modern Robinson’s pub that has been even further modernised to produce an atmosphere overwhelmingly centred on food. Even setting aside the prices, there’s no comparison as a drinking venue.

It was very noticeable on New Year’s Eve, when, together with Martin Taylor and our two guests from the USA, Dave and Dick Southworth, we had a lunchtime wander around Stockport, that Sam Smith’s Boar’s Head was standing room only before noon, when most of the other pubs in the town were quiet. So they must be doing something right that appeals to a large number of people. And some of them, by the look of it, were even under thirty!

It may be a mischievous suggestion, but one thing that would significantly improve the quality of my life would be if Sam’s took over my local pub, stopped reserving tables for diners, and kicked out the piped music and TV football. I think they’d get more customers, too. But it’s not going to happen.