Top of the Moor 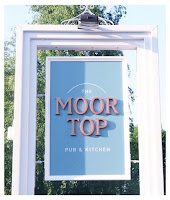 This isn’t normally a pub reviews blog, but as the Moor Top, one of only two pubs within comfortable walking distance of my house, has recently received what is reputed to have been a £1 million refurbishment, I thought I should pop along and take a look.

It’s a large estate-type pub that was built by Wilsons’ predecessors Walker & Homfrays in 1955. Being the only pub for half a mile in any direction in a fairly well-off residential area, you might expect it to have been a goldmine, but for whatever reason it never seems to have fulfilled its potential. At one point it even received the dreaded Pennine Hosts “yoof” makeover with predictably dismal results.

WhatPub? shows it as being owned by Spirit Group, who have now been taken over by Greene King, so I’m not sure what the current ownership situation is. However, it has been leased to an independent operator, who also ran the award-winning Damson restaurant opposite, although this seems to have now been converted into two separate establishments called Roost and La Cantina. It is they, and not the pubco owners, who I would say are responsible for the style of the makeover and the pub’s current offer.

It’s clearly a very expensive and thorough job which erases all vestiges of its previous “estate pub” ambiance, and even includes a couple of distinct areas separated from the rest of the pub by full-height coloured glass screens. There are plenty of bare boards, high stools and pastel colours, although there is still a bit of comfortable bench seating along the front. The entire front yard is now a well-furnished beer garden. The photo montage below gives a good impression of the general look. 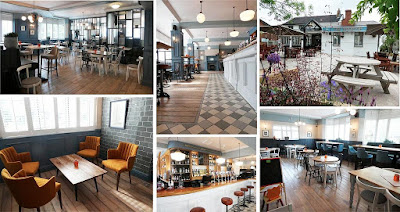 As you walk in through the front door, you are met with six handpumps on the apex of the bar. On my visit there were five cask beers on: Moor Top Best Bitter (brewed by Stockport Brewing), Stockport Deluded IPA, Taylor's Landlord, Wantsum 1381 (from Canterbury) and Muirhouse Pirate's Gold (from Ilkeston, Derbyshire). The Best Bitter was in decent nick and refreshingly cool on a hot, humid day. It was a surprisingly reasonable £3.20, although I would expect the other beers to be rather dearer. All of the guest beers (although not, I suspect, the Landlord) are supplied through Stockport Brewing.

There is also a "keg wall", with seven beers, although it suffers from the boards not showing either the breweries or prices. A chalkboard for the cask beers showing prices wouldn’t go amiss either.

Not surprisingly there are no beermats, not even in holders on the bar, and my visit was rather marred by earsplitting shrieking emanating from an infant.

There’s a fairly typical menu of modern upmarket pub food, with the common contemporary problem that the zero key on the typesetter’s keyboard seems to have ceased to function. Suffice to say you’re not going to find a bacon barmcake.

The car park is now pay and display, with a £2 charge for up to 3 hours 24/7, and no refunds unless you spend at least £5, so no popping in for a swift pint. It’s understandable given the busyness of the location, but the minimum spend comes across as rather churlish.

It’s not, to be honest, really my kind of pub, and I can’t see myself making it a regular haunt any more than I did before. However, it all seems to have been thoughtfully done, including taking the beer offer seriously, and I’d say it has the ingredients to do well in that location.

Posted by Curmudgeon at 2:10 pm