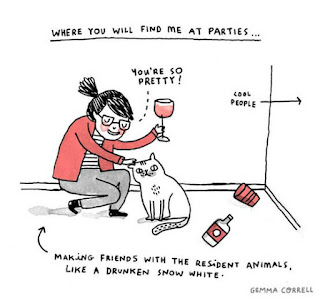 Matthew Lawrenson of Seeing the Lizards has recently done a couple of very honest blogposts on the subject of autism and pubgoing – here and here. He has Asperger’s Syndrome and finds that going to the pub poses a range of social challenges that most people simply do not appreciate.

He’s said on Twitter that he perhaps expected more of a response in the comments, but to be honest it’s a subject of which most people have little experience and feel they have nothing to contribute. Too often, ASD people are simply dismissed as being a bit weird and geeky, without any recognition that they have social needs and feelings too. And, as I said, there seems to be a widespread view that, if they can't express their feelings “appropriately” and stick to the unwritten rules, it's probably best for them to keep quiet and not embarrass themselves and others.

I’ve never been diagnosed with anything of this kind and don’t propose to launch into confessional mode, but I have to admit I have considerable sympathy with what Matthew says. I’m a fairly reserved and self-contained person, who for much of the time is content with his own company and, while I value and enjoy social interaction, it does take a certain amount of effort that many others won’t appreciate. After a while, I feel the need to withdraw for a bit to recharge my batteries, which is something that pub closing time often signals.

I’ve written before how pubs can provide a unique social opportunity for shy and reserved people, as you can control just to what extent you interact with others. The simple act of getting out of the house and being in the company of others, even if you don’t converse with them, can in itself be very valuable. I can’t think of any other situation where that is possible.

However, you can only do that in the traditional “drink and chat” environment. The enforced intimacy of many micropubs militates against it, as does, at the other extreme, the pub where “there’s always something going on.” Very often, for the ASD person, just sitting there with a pint, reading the paper or browsing the Internet, and maybe exchanging the odd word with other customers, is all the social interaction they want or need. It may not seem much but, for them, it’s far better than nothing.

By coincidence, in the same week, the government announced the appointment of a Minister for Loneliness. I couldn’t help being reminded of Ronald Reagan’s famous saying that “The most terrifying words in the English language are: I'm from the government and I'm here to help.”

Possibly someone in government might make the connection between an increase in loneliness and social isolation, and the closure of thousands of pubs and clubs over the past ten years as a direct result of government policy. But I wouldn’t hold out much hope.

As Grandad says in this post, “Britain has a Minister for Loneliness in the midst of God knows how many other ministries who all combine to be the Ministry for Isolation.”

Posted by Curmudgeon at 3:52 pm