A load of froth 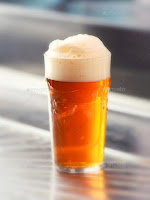 It’s generally taken as read that beer in the North has a thick creamy head, while Southern beer is flat. There’s a fair bit of truth in this – but why has this division come about? What follows are just a few reflections based on my personal experience, and I don’t claim they represent any kind of definitive answer to the question.

The first thought is that, broadly speaking, the North was much more industrialised than the South. This led to greater population density, and many more pubs needing to cater for hordes of thirsty miners and factory workers. Therefore turnover was higher, and beer in the North was, quite simply, usually fresher. Even when dispensed straight from the cask, newly tapped beer will still produce a thick, frothy head, although that will largely disappear once it has been on sale for a couple of days.

The distinction is certainly long established and not a recent phenomenon. In his book The Brewing Industry 1950-1990, Anthony Avis describes how, in the 1950s, beer in the North-East was typically served with a head standing proud of the glass which drinkers would proceed to blow off onto the floor, while in Norfolk, “all the Norwich brewed beers, before and after the last war, were much the same – thin, flat and lifeless; however, they suited, or appeared to suit, the customers.”

Another factor is the use of electric metered dispense with oversize glasses, which obviously allows a head to form in the glass above the surface of the beer. These were widely adopted in the North and Midlands from the early 60s onwards, but never caught on to any extent in the South – the only Southern pubs I’m aware used them were a handful of Gales tied houses. I understand they were introduced by brewers because they believed that it was in principle illegal to serve any short measure, so this system would allow them to continue meeting the local customer preference for a thick head. In my early drinking years in North Cheshire in the late 1970s, metered dispense was the norm, and handpumps a relative rarity.

In my view, this was a better system than handpumps, as it ensured full measure, was much quicker in a busy pub, and largely removed the ability of bar staff to ruin a pint by poor pulling technique, although obviously that battle is now lost. From the late 1970s, following case law that allowed, within reason, the head to be defined as part of a pint, most brewers stopped installing them, and they gradually died out over the next twenty years. Their only remaining stronghold is in the club trade in the North-East, albeit pretty much always with keg rather than cask beers.

But, in the 1960s and 70s, if you went in the average pub across much of the Midlands and North, you would be likely to be served your beer in an oversize glass with a thick head reaching almost to the top, whereas in the South you would get beer from a handpump with a head no more than a quarter of an inch deep, or often just a thin coating of foam on the top. It’s also worth adding that, in the South, you would often get keg beer with little or no head as well. Getting a pint of totally flat-looking beer with plenty of CO2 still dissolved in it was a touch disconcerting.

Where handpumps were used, the difference, while still there, was not so great. Pubs in the North-West did generally use sparklers, but they were just the short stainless steel type that screwed on to the end of the pump nozzle, and could be tightened or loosened as desired. A few rural pubs still served their beer on gravity. One feature that was commonplace, both on handpumps and meters, was the “dog’s dick”, a conical white plastic device that screwed on to the pump nozzle, with an extension that emerged from the centre when beer was pulled through it to aerate it more, hence the name. You never see those any more.

However, cross the Pennines into West Yorkshire and you would encounter something completely different – a pint pulled with an incredibly tight, creamy head that initially looked like milk and took several minutes to clear. I hadn’t really done much drinking in that part of the world, and remember being taken aback when I first came across this system in a Taylor’s pub in Heptonstall in about 1984. It was also commonplace in Tetley’s pubs. This was made possible by the use of the “economiser”, a device which allowed the recycling of spilt beer collected in the drip tray, so it was possible to pull a pint and let a lot of beer cascade down the side of the glass without wasting it. This obviously raised some hygiene concerns, but it undoubtedly, with fresh, lively beer, produced an extremely smooth and distinctive pint that literally could be described as “silk in a glass”.

This system never really spread beyond West Yorkshire and Humberside, although there is a small outpost in and around Edinburgh. Even there, some local authorities took exception to it on hygiene grounds, and forced the brewers to come up with an alternative. What this involved was using a handpump with a quarter-pint rather than half-pint cylinder, and a long “swan-neck” pipe that reached to the bottom of the glass, so pretty much all of the beer was being dispensed within the liquid in the glass rather than cascading on top of it.

Done properly, this gave a decent approximation of the economiser-style pint, and it rapidly spread across most of the North where economisers never reached. Swan-necks are now the standard means of real ale dispense. As with economisers, if the beer is fresh and full of condition, it can produce very good results, but with beer that has been on sale for several days you can end up with a lovely-looking pint of utter glop, with the sparkler having knocked any remaining life out of it. Another problem is that they make it all too easy to serve seriously short measures.

The 1990s saw the rise of “smooth” keg ales, which were initially developed as an extension of the Guinness dispense system, first seen in Caffrey’s, but rapidly became more of an attempt to replicate the look and mouthfeel of swan-neck dispensed real ale. They certainly do look the part, but in my view have a rather “soapy” feel to them and don’t come anywhere near that actual drinking experience of cask. These have now spread across the South, retaining the same thick creamy head, but are still seen as something distinctively “Northern”, underlined by the advertising message of John Smith’s, the leading brand. Non-smooth keg ales have now largely disappeared outside the craft sector – would a pint of keg Courage Best ecountered in a South-East pub now also be smoothflow?

As I said, not the full story, just a few thoughts from my own experience on how we have arrived at the present-day situation. And it’s interesting how memory of how things used to be fades, so fewer and fewer people will even be aware that electric metered dispense was once widespread, or the typical handpump had a half-pint cylinder, or there were such things as “dog’s dicks”, and even those who were around at the time may struggle to recall them.