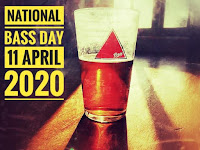 As many readers will already be aware, National Bass Day is being held for the first time on Saturday 11th April this year, a day that marks the 243rd anniversary of William Bass buying his first brewery in Burton-on-Trent. The thinking behind it is fully explained here by thewickingman, but basically it is an independent initiative to celebrate an iconic British beer that seems to have been sadly neglected by its current brand owners. It has attracted an impressive amount of support, with its dedicated Facebook group now approaching 700 members, and a growing number of licensees pledging to get a cask on specially for the day.

However, probably inevitably, it has attracted the usual crop of carping and naysayers. One obvious question is that of why should anyone want to give support to a brand owned by a multinational company and contracted out to another large brewery. However, it is a central part of our beer heritage, the first registered trademark, and still probably the best-known British (as opposed to Irish) beer name in the world. It’s something well worth championing, and if its owners are happy to neglect it then someone else has to stand up.

Despite an almost total lack of advertising and promotion, and the absence of the support provided by a tied house network, it still retains a strong following and huge reserves of customer loyalty, both in its home territory and across the country in pubs from Tynemouth to Falmouth. Some pubs who have joined the Facebook group are reporting selling 80 or 100 gallons a week, or nearly three full barrels, which is some going for a single cask beer in this day and age. That is surely something worthy of celebration. Without the muscle of a PR machine behind it, or any pressure to bundle it in with other products, every pub that stocks Bass has made a positive choice to have it on the bar, meaning that it’s generally well cared for.

But, of course, it’s not what it was, is it? It hasn’t been brewed in the Burton Unions since 1981, and since then it’s been passed from pillar to post and ended up being contracted out to what were once one of its main local rivals. However, memory is a very fickle thing, especially when it comes to taste, which is something that cannot be preserved. Can we honestly say that anything is really what it was? And the fact that it was once brewed in the Unions is now ancient history. I’d say it’s still a fine beer, very quaffable for its strength, with a distinctive bittersweet character and slight hint of sourness, that certainly doesn’t disgrace its proud heritage. As thewickingman says in the post linked to above,


Is Draught Bass still that beer, produced in the Burton Union system, in my memory from the days as a young bloke in Burton? Who knows, nostalgia isn’t what it used to be. What is certain is that the Draught Bass, currently brewed under licence by Marston’s in Burton, is one of the most well-crafted traditional beers coming out of any brewery in England. As Roger Protz has written, “If Timothy Taylor’s Landlord…or Draught Bass are bland beers, I am a banana sandwich.” He’s not a banana sandwich, but he does support National Bass Day 2020. Thanks Roger.

And aren’t customers being misled as to its provenance? Shouldn’t it say on the pumpclip “Brewed by Marston’s”? Some people do get rather exercised about this issue, but it has to be recognised that, nowadays, most beers and other consumer products sell through strong, easily-recognised brand names. The days of “Bloggs’ Burpington Bitter” have long gone. Drinkers of Doom Bar or San Miguel really aren’t that bothered about who owns the brand or where it is brewed. There is no deliberate intention to deceive here, and it’s surely common knowledge amongst Bass drinkers where it actually comes from. At least it’s still brewed in Burton by people who care about it.

If Bass doesn’t particularly float your boat, or you see nothing to appeal to you in this initiative, that’s fair enough. Everyone has their own tastes, and it’s not compulsory to get involved. But it seems a touch churlish to carp and whinge about something that, after all, is promoting British beer and pubs. As thewickingman’s granny used to say, “If you can’t say anything nice, then don’t say anything at all.”

It would perhaps be wrong to attribute too much wider cultural significance to National Bass Day, but it’s worth noting that it is a grassroots initiative to promote a traditional British cask beer, and the largely traditional pubs that sell it, that goes completely against the grain of the rejection of the past and the quest for ceaseless innovation that seem to characterise so much “beer enthusiasm” nowadays.

Posted by Curmudgeon at 8:27 am