You can lead a horse to water (again) 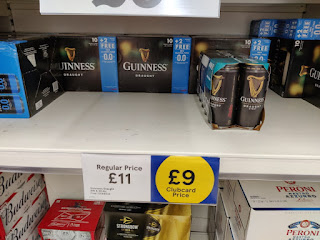 The other day in Tesco, I spotted ten-packs of canned Draught Guinness that were being sold with two cans of the alcohol-free version included. This may seem like an ingenious way of getting drinkers to give it a try, although apparently somebody complained because he thought at first glance it was a twelve-pack of the zero variety. However, on the other hand it perhaps comes across as having a whiff of desperation about it.

In recent years, the alcohol-free beer category has been heavily promoted, partly in response to health concerns over alcohol in general. An example of this is Heineken’s announcement of the roll-out of draught alcohol-free lager into a much greater number of pubs. Claims have been made that, within a few years, it’s likely to account for 10% or more of the entire beer market. Yet it never really seems to have taken off as hoped, and the zero alcohol section in said enormous Tesco is an apologetic two bays, also including wine, in a very long beer aisle. In fact they withdrew a “3 for £3” offer including some brands from small craft breweries, and now only feature mainstream brands.

The problem is that the marketers fail to recognise that the fundamental reason people drink beer is because it contains alcohol. Obviously in the current climate they can’t actually say this openly, and instead go on about taste and refreshment. While these are significant factors, if beer wasn’t alcoholic people wouldn’t drink it in anything like the same quantities.

I’m certainly not decrying the concept, and recognise that it has a place in the market where, for reasons of either health or wishing to maintain mental clarity, people don’t want a normal-strength beer. Indeed, I’ve tried a number of varieties myself, although I have drunk it much less since the beginning of last year’s lockdown, when my overall beer consumption significantly dropped anyway so I no longer saw much point.

But, ultimately, it’s always to a greater or lesser extent a distress purchase. People only drink it because they are familiar with normal-strength beer and see it as something that tastes and feels vaguely similar, although it’s never really quite as good, as alcohol is a key component in the flavour of beer. It is always hanging on the coat-tails of normal beers. Nobody is ever going to go on a pub crawl drinking alcohol-free beer, unless one individual is tagging along with a group of drinking mates, and nor are they going to seek out an obscure pub because it happens to sell the rare Zachariah Zodiac’s Zero Ale.

For this reason the potential of the sector is always going to be limited, and in fact may not be hugely above where it has reached at present. Many brewers who are piling effort into developing brands in the sector are going to end up with burnt fingers, and retailers won’t be interested in finding shelf space for a me-too alcohol-free version of every major lager brand.

You might imagine that, as there’s no duty to be paid, going alcohol-free offers the possibility of saving a fair bit of money, but in practice it doesn’t quite work out like that. Brewers will point out that the de-alcoholisation process is in itself expensive and wipes out much of the duty saving, although it must be remembered that value comes from what someone is prepared to pay for a product, not what it costs to make.

In the on-trade, alcohol-free prices tend to be only a little below those of normal beer. The customers aren’t likely to be very price-sensitive anyway, and also probably won’t be regulars who shift large volumes. Plus there is the thinking that, if it is priced similarly to standard beer, it will be perceived as being of equal worth rather than just a cheap substitute. One exception to this is in Wetherspoon’s, where alcohol-free beers are priced at the same lower level as soft drinks within their inclusive meal deals, something that I’ve taken advantage of a few times myself.

In the off-trade, the fact that Tesco were offering “3 for £3” as a special offer rather illustrates the problem. There’s very little in a 330ml can that’s below 75p even in a multipack, with many at the full £1, and the 500ml single bottles tend to be £1.30, compared with 4 for £6 in the usual multibuy deal for standard bottles. Yet my local Morrisons will sell you a pack of ten 250ml stubbies of 2.8% French lager for £3.50. That’s probably on a par with the alcohol-free beers in terms of palatability, and realistically will make little difference to either health or sobriety. So if you just want a refreshing drop of something vaguely beery, it’s a much cheaper option.

I can’t help thinking that if 330ml cans of alcohol-free beer were made available at a similar price to cans of Coke and Pepsi they would find many more takers as a soft drink substitute than as a beer substitute. Possibly the future for the category should be portraying it not as something that almost tastes like normal beer, but as something that is (depending on your tastes) a lot nicer than fizzy pop, most of which tends to be extremely sweet.

I ran a Twitter poll on how often people drank alcohol-free beers which was widely circulated and got an impressive response, but didn’t show much enthusiasm. It must be said that many beer enthusiasts are very dismissive of the category, although I think, as often happens, people fail to appreciate how others’ attitudes to drinking and patterns of consumption can vary greatly from their own.

POLL: Do you drink alcohol-free beers?