The main roads through West Yorkshire are notable for the large number of closed pubs and Indian restaurants in former pubs. So I was struck the other week when driving past the Turnpike Inn at Rishworth near Ripponden, at about 7.30 pm on a Friday evening, to see the pub’s car park completely full, and large numbers of cars parked at the roadside and on the verges. This is a formerly closed pub that has been revitalised in the past year, as reported here by the Morning Advertiser. 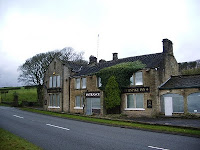 Clearly the Turnpike is a pub that majors on food, but they must be doing a lot right to bring in so many customers, and it’s always good to see a business venture proving successful. Looking at the menus, it’s not at all cheap, either. (The menus are also notable for their “round pound” pricing.) I’d like to bet, though, that, despite its obvious popularity, the Turnpike is nonetheless selling a lot less beer than it did in previous incarnations in the 60s and 70s. But it does prove the point that, even in an overall declining market, you can still be very successful by providing something that people are prepared to make the effort to come for.

The one pub operator who are proving a success on a national scale where others are falling by the wayside is, of course, Wetherspoon’s. Now, as I’ve said before, on a personal level I am lukewarm about the chain. To me, they’re just not proper pubs in the sense that pubs like the Nursery, Arden Arms, Griffin and Davenport Arms are; they are impersonal, echoing, eating and drinking barns. But you can’t argue with success, and they are opening new pubs at a rapid rate, while it’s rare to go in a Spoons and not find it busy. They have done so by ripping up the established orthodoxies of the pub trade, and by actually taking the trouble to research what customers want. The company is also very adept at site location and playing the property market.

If other pubs want to compete successfully with a nearby Wetherspoon’s, they have to do at least one thing markedly better. The days of the nondescript, bog-standard town-centre pub are over.

It will be interesting to see what happens in Hazel Grove when the new Wetherspoon’s, the Wilfred Wood, opens at the end of this month. The main road through the village has no less than eight Robinson’s pubs in about half a mile, many of which are distinctly down-at-heel and forgettable. Will the Spoons put some of them out of business, or will it increase the total pub market in Hazel Grove?
Posted by Curmudgeon at 7:58 pm