For the past month, I’ve been running a poll in the sidebar that mirrors the question we are being asked to vote on today at the ballot box. It was originally hidden away at the bottom, but a couple of weeks ago I moved it up to the top after another poll was concluded. I’ve deliberately not touted it around Twitter, as when I’ve done that before it has led to seriously distorted results. The final result shown above is not all that different from many opinion polls.

POLL: How will you vote in the EU Referendum?

On the other hand, the Twitter poll I ran cannot really be said to give a representative cross-section of public opinion, although the number of responses is very impressive. Note how it achieved no less than 41 retweets. 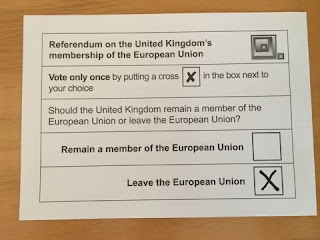 Now, it won’t come as any surprise which way I will be voting. But, whatever your views, please make sure you do vote and make your voice heard.

Vast amounts have been written on the subject, but if you only read one article, make it this one by Brendan O’Neill:

What we are voting for

From a beery point of view, Wetherspoon boss Tim Martin has written in the Morning Advertiser:

While, in the interest of balance, beer writer Matthew Curtis has written:

Posted by Curmudgeon at 9:02 am