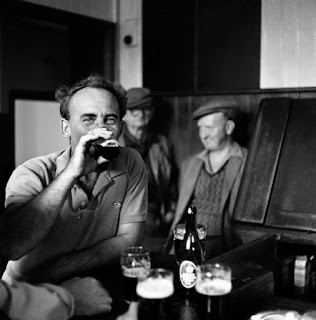 H/t to Boak and Bailey for drawing my attention to this highly evocative set of pictures of workers in the Suffolk town of Leiston enjoying a drink in the Engineer’s Arms in 1966. The photos are described as being set at the time of the construction of the Sizewell A nuclear power station on the nearby coast, but I suspect the workers are from the premises of Richard Garrett & Sons directly opposite, which is obviously where the name comes from.

The pub itself is still going strong (albeit not opening weekday lunchtimes), and the stained glass public bar window can be seen on the StreetView image. Part of the works is now the Long Shop Museum, which looks like the kind of place that would really fascinate me.

Work-related drinking, whether in the lunch break, or after knocking-off time, was once a staple of the pub trade, and a far better way of bonding with colleagues than any contrived team-building exercise. See this recent comment by Alan Winton. Now, of course, it is much diminished, due to the decline of large factories, the general anti-alcohol climate, and employers becoming increasingly intolerant of any drinking whatsoever by their employees.

The absence of lager, the number of halves being drunk, the unmarked handpumps and the universality of fags and ashtrays are all very noticeable. The clientele is also exclusively male, the only women present being behind the bar.

However, that simply reflects the make-up of the industrial workforce rather than any kind of discrimination in the pub. Even today, the manual workers in such heavy industry as we have left will be overwhelmingly male. A few years ago I worked for a spell as an accountant at a now-closed paper mill, providing maternity leave cover. The mill ran continuously 24/7, with five rotating shifts. Every single one of the 50 or so shiftworkers was male, but nobody seems to get aggrieved about that.

Posted by Curmudgeon at 3:28 pm