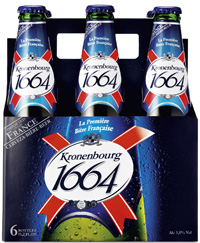 Blogger Mark Wadsworth has familiarised us with the concept of Indian Bicycle Marketing, whereby manufacturers use a lot of advertising fluff to distinguish products that are largely identical.

I was reminded of this on reading this report about a new marketing initiative for Kronenbourg 1664. No mention whatsoever of product characteristics, just a lot of publicity guff and tat to create a bit of excitement. “The on-pack promotion offers shoppers thousands of chances to win a variety of prizes, including a trip for four to the Alsatian mountains, mini fridges and bottle openers.”

We seem to have a range of “premium lagers” competing for attention in both the on- and off-trades which people struggle to tell apart. Could any pub drinker really give you a meaningful description of the difference in flavour between San Miguel and Carlsberg Export?

The one exception is Peroni, which has established a clear position of the leader of the pack, and commands an appropriate price premium. In my experience, it’s the best of the bunch, with a clean, crisp taste, and a small but important advantage in terms of strength at 5.1% ABV. Significantly, it’s not available either in Wetherspoons or in cans. It’s also a genuine import, but that doesn’t seem to help Heineken very much.

The one characteristic on which it might be possible to establish a point of difference in the market, namely alcohol content, is now effectively barred as a result of government initiatives. I’ve argued in the past that, at least in the take-home market, there would be a strong opening for a premium lager *that bit* stronger than the others, maybe around 5.5% ABV. But no major brewer dares do that – just look at the aborted launch of Stella Black a few years ago.

Back in its heyday, Stella Artois achieved that, as Pete Brown often reminds us. It was both noticeably stronger than the competition, at 5.2% ABV, and was also a premium product made from superior ingredients. But that position has been steadily eroded, with both its strength and quality dumbed down, and now it’s down towards the bottom end of the premium lager pecking order.

Kronenbourg 1664 is the best bangs-per-buck on the Wetherspoon meal deals, by the way. Say no more.

By coincidence, Tandleman posted yesterday about craft lagers. But I’m not sure whether they’re likely to tempt many drinkers away from Peroni.

Posted by Curmudgeon at 8:38 am