Last week, there was an utterly gobsmacking piece in the Morning Advertiser on How pubs overcame the hardest decade in the trade’s history. Now, hang on, but I’d hardly say that experiencing a decline in beer sales of 36% represents “overcoming” anything. Pubs haven’t fought back and won, they have been defeated in a series of bloody battles, not helped by many industry leaders fighting on the other side, and have had to accept a much diminished role in life.

Of course some pubs can still thrive: it’s not a uniform effect. But the range of locations where they can succeed, and the customer base they attract, are both now much narrower than they were ten years ago. Try telling the residents of Parr or Longdendale that pubs have “emerged stronger” and they will laugh in your face. Tandleman reports here that the previous ten pubs on his local estate of Langley have now come down to one or none, depending on how you draw the boundaries. It’s reminiscent of Spinal Tap, who responded to the charge that they were playing in much smaller venues by claiming that their appeal had become more selective.

The section on the smoking ban is particularly breathtaking. I reproduce the whole thing below. 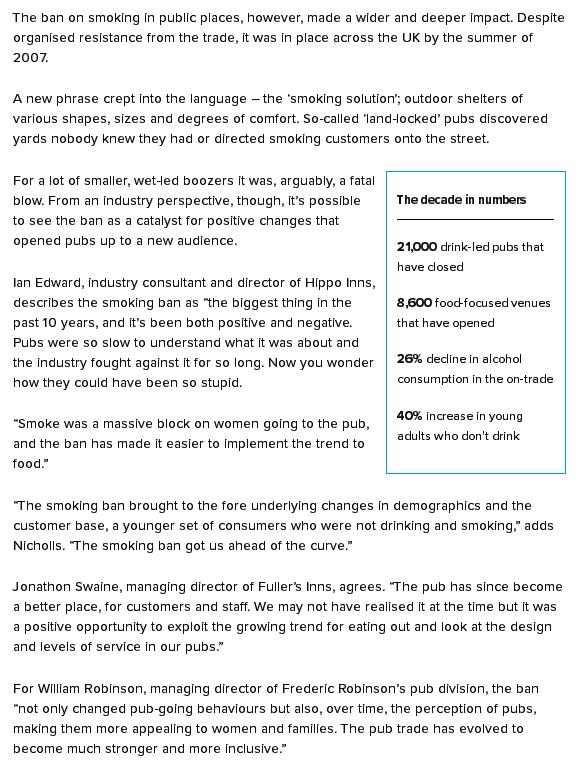 It just reeks of snobbery, that pub owners have managed to replace scuzzy smoking customers with smarter, more upmarket ones who are more likely to order food. But, if you run a brewery, you’ve also lost a lot of customers for your beer. And the comment about the ban attracting more women is ridiculous when you consider that a higher proportion of women now smoke than men. Plus it would have been easy to increase pubs’ appeal to women and families (if indeed that is what has happened) by creating separate areas rather than banishing smokers to the nether circles of hell.

The comment by our local brewery director William Robinson that “the pub trade has evolved to become stronger and more inclusive” is particularly egregious. This, of course, is the company that in recent years has happily shed about a fifth of its estate, mostly the more basic boozers, and is currently gleefully engaged in wrecking a growing number of those that remain. Frankly, I’ve never read such deluded, patronising drivel in my life. It’s not my style, but I’m sorely tempted to employ a four-letter word. William, you are a disgrace to your industry. Your grandfather, Sir John Robinson, will be turning in his grave.

The pub trade continues to be in serious long-term decline. And it really doesn’t help when senior industry figures seem to believe that’s a good thing. They really should stop smirking – the Prohibition Train is heading their way before too long.