Seen but not heard? 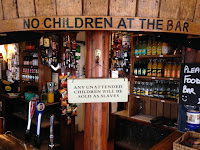 Something you will gather from reading this blog is that “Mudgie” is to some extent a persona, and at times can put across a somewhat exaggerated and caricature version of what “Peter” genuinely thinks. One the one hand, you have the dishevelled, semi-alcoholic, Marina-driving codger who sits on a bench in an obscure corner of the pub, mangy pub cat on his lap, nursing a pint of boring brown bitter, reading the Daily Mail and muttering something about hell and handcarts. Then, on the other hand, you have Mudgie…

Yesterday there was another outbreak of debate in the Twittersphere over the old chestnut of children in pubs, which was reflected in these blogposts by Tandleman and Boak & Bailey. Now, the old system whereby children were theoretically not allowed in any room in a pub containing a bar suited me fine, but I (speaking as Peter) would accept that, with the increased importance of food in pubs, and changing social patterns, it’s not appropriate for the present day, and more flexibility is needed.* Mudgie, on the other hand, would tend to agree more with Keith Wildman.

I don’t have any kids myself, but I do have six young cousins aged between 5 and 10, four boys and two girls. I love them dearly, and they get generous birthday and Christmas presents. You know, really big lumps of coal. They also ultimately stand to inherit that part of my ill-gotten hoard that hasn’t been bequeathed to Cats’ Protection. But the last thing I'd want is to be in a pub with them when I just want a quiet drink.

It has to be recognised that this remains a controversial and divisive issue, and it’s unrealistic to believe that in the enlightened modern era all pubs and bars should be suitable places for playing Happy Families. So I will leave the following points for your consideration.

* Oh, and I also quite enjoy plenty of so-called “craft beers”