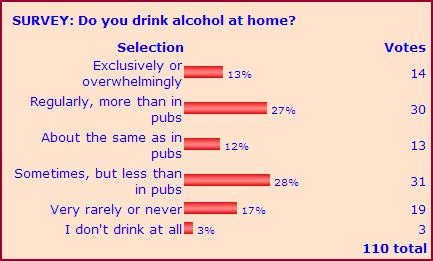 This month’s Opening Times column criticises the oft-heard view than drinking in pubs is in some way “better” than drinking at home. So I thought I would run a poll on to what extent people drank at home versus in pubs and bars. The results are shown above.

There’s a fairly symmetrical pattern, albeit with a dip in the middle rather than a bell curve. Overall, 40% of respondents said they drank more at home; 45% more in pubs and bars.

I wouldn’t say this is representative of the population as a whole, though. In terms of total alcohol consumption, the ratio is more like 2:1 in favour of the off-trade. And, as one of the commenters suggests, it would be interesting to find out how many of those who answered “very rarely or never” were single blokes.

For the benefit of mobile users who might not have seen it, the latest poll is on whether you’d desert your favourite local if it stopped selling real ale.