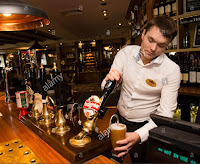 On the National Bass Day Facebook group, several pubs such as the Old Vaults in Uttoxeter, the Fountain in Leek and the Devonshire Arms and Derby Inn in Burton-on-Trent have stated that they are selling 80 to 100 gallons of Draught Bass every week. That’s nearly three full barrels and, given that Bass is supplied in 10-gallon containers, means that they’re usually emptying a container within a day.

Forty years ago, it wasn’t uncommon for big, busy pubs in industrial areas, such as Holt’s in Manchester and Tetley’s in Yorkshire, to be shifting twenty barrels or more a week of Bitter. The sight of the pumps being constantly in action was usually a reliable sign of a decent pint. However, the switch to lager, especially amongst volume drinkers, and the general decline of beer sales in pubs have put paid to that, and in today’s climate three barrels of one single cask beer is pretty good going.

So often nowadays you encounter cask beer that, while not off as such, is that little bit tired, tepid and flat, and many pubs seem to be constantly operating on the edge of the maximum recommended time for keeping beer on sale. And it’s not that uncommon for beer to tip over the edge and turn to Sarson’s Best. But if you can reliably shift a container within a day, or not much more early in the week, you can at a stroke eliminate one of the main reasons behind customers receiving poor beer over the bar.

Of course, it’s not the only factor, and attention still needs to be paid to giving beer time to settle and mature, basic hygiene and maintaining temperature and condition. It’s also not as simple as saying that if a pub cut its number of cask lines it would turn the remaining beers over more quickly, as the reduction in choice might well result in customers taking their business elsewhere. However, there’s an element of chicken and egg about the trade-off between range and quality, and if you are succeeding in selling a cask a day it’s a sure sign that your customers appreciate it. No pub will be able to do that if the beer isn’t good in the first place.

It’s always worth remembering that two of the fundamental tenets of good cellar management are keeping the beer in the cellar for a decent period to allow it to settle and mature, and once it has been put on sale to empty the cask as quickly as possible. So many of the problems drinkers experience with poor beer are due to those principles being reversed.