...but not a place to sit. I concluded my recent blogpost about the pleasures of solo pub visits with “It also must be said that there are many – probably too many – pubs where the general layout, atmosphere and offer make enjoying that solitary pint well-nigh impossible.” And, all too often, I now find myself going into pubs, looking round, and deciding that, even though there’s plenty of seating, there’s nowhere I actually fancy sitting. 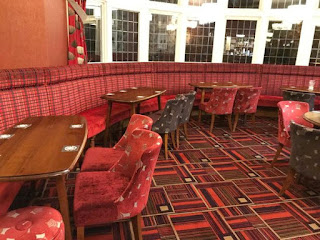 The photo above is taken from this newspaper article about Sam Smith’s Crow’s Nest pub in Cleethorpes. It was built in 1957, and has probably been little changed since then. It shows the lounge, with a pattern of seating that, a generation ago, was very typical of many pub interiors, with continuous fixed wall benches and relatively small, round-cornered tables.

I have discussed the merits of bench seating in the past – it is comfortable, with upholstered seats and backs; it is sociable, facing into the centre of the room rather than just at your companions; it is flexible, so you can spread out your coats and bags, or squeeze together to allow more people in; and it is consistent, so it is the same in each spot in the pub. It is the quintessential type of pub seating.

However, in more recent years benches have increasingly been replaced by other forms of seating. First are the dreaded posing tables, which to my mind are extremely awkward and uncomfortable, and create a division with anyone at a lower level. If I went in a pub and saw nowhere to sit but posing tables, I would go elsewhere. In a bizarre move, one fairly traditional pub not too far from me has recently replaced half the seating in what was a very pleasant and well-appointed lounge with posing tables. No, I don’t understand it either.

Then there is the introduction of much larger tables, that may be suitable for eight or ten. These dominate the interior and, compared with smaller ones make solo drinkers or groups of two or three feel out-of-place. They also make the usage of the space less flexible. My local pub had a fairly respectful refurbishment a few years ago, but it would greatly benefit from overlarge tables being replaced with twice as many smaller ones.

In contrast, other pubs feature regimented rows of small rectangular tables for two or four, with bare wood dining chairs, which produces an atmosphere more akin to a French bistro than a cosy pub. This is a particular favourite of Wetherspoon’s. You go in Wetherspoon’s in the morning, and see a fair number of the tables occupied by one solitary bloke with his newspaper and plastic carrier bag. Put them on benches facing into the middle of a room, and they’d be much more likely to talk to each other, as indeed they do in certain other pubs.

Then you get squishy sofas, which place you at the wrong angle for drinking, make a very inefficient use of space, and put you at a lower level than other customers. And don’t get me started on industrial-chic craft bars where you’re expected to sit on what is basically a plank!

While all of these forms of interior design may have their fans and their merits, to my eye all are much inferior to wall benches. Introducing a variety of them in the same space produces an awkward, unsettled interior, and means that if your favourite type is occupied you may have to put up with something you don’t care for. 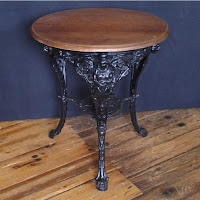 Bench seating is always a positive in pubs, but it is possible to produce an appealing interior without it. A key factor is to have comfortable chairs with upholstered seats and backs, like those in the picture of the Crow’s Nest, rather than spindly bare wood ones or backless stools. And the chairs should be arranged so that half of them have their backs against the wall and face outwards into the room, rather than facing tables arranged at right-angles to the wall. Tables should be relatively small, ideally no more than four-seaters, and encourage a more sociable and pubby feeling if they are round or oval rather than rectangular. You can also move around them to get closer together or further apart. The round, three-legged Britannia table, shown at the right, is the pub classic – and, of course, three-legged tables don’t rock on uneven floors.

Speaking personally, if I don’t feel “at home” in a pub, I will be deterred from returning, no matter how good the beer is. Obviously, all the above is basically subjective personal opinion, but I think I’ve spent enough time in pubs to have a good idea of what works in promoting social interaction, and what makes people feel awkward and ill-at-ease.