No, not that kind of capital, Burton-on-Trent, the capital of British brewing. I went to Burton a couple of times in the 1980s, once to visit what was then the Bass Museum, but hadn’t been there for over thirty years, so it seemed a good choice for the latest Beer and Pubs Forum Proper Day Out on Friday 6 March. It also offered the opportunity of a rehearsal for National Bass Day on Saturday 11 April.

Burton grew dramatically in the 19th century due to the expansion of the brewing industry, attracted by its high-quality hard water rich in gypsum. At one point, the town was responsible for a quarter of all beer produced in Britain. It became a County Borough in 1901, but in fact did not grow significantly after that, and by the time of local government reorganisation in 1974 was the second smallest County Borough in the country after Canterbury. Today, given the decline of brewing, it gives the impression of being like a man who has lost weight and is now too small for his clothes, being rather like Bradford in that respect. I remember from my previous visits that it had an unusually sprawling and dispersed layout, with the town hall and parish church situated on the north-west side of the station, three-quarters of a mile from the main shopping centre.

This meant that the pubs we wanted to visit were widely spread out, and some of the distances between them were a bit excessive for those with a limited amount of time to spend there. This gave rise to some debate on the forum about the itinerary, but eventually we arrived at a compromise which allowed those with more appetite for walking to follow a different route to call in a couple of the more far-flung ones. This prompted me to discover a website which enables you to calculate the walking distance and time between a pair of postcodes, which will prove useful in planning these trips in the future. It doesn’t give any indication of hills you might encounter, though, which was certainly a issue in Preston, but was unlikely to affect us in Burton, which is largely flat.

The day dawned bright and cold, a sharp contrast with the almost constant rain we had endured during the previous few weeks. The trip gave me another opportunity to take advantage of the savings available from the Senior Railcard that I acquired the previous year. On the scenic route through the Peak District between Stockport and Sheffield I noticed some snow still lying on the hilltops in the Vale of Edale. South of Sheffield, any flooding appeared to have receded, although the river levels still looked pretty high. 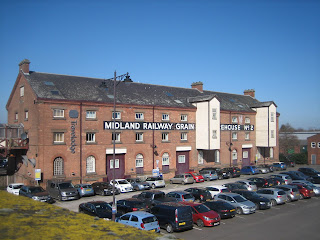 You are met at Burton Station by an impressive former Midland Railway grain warehouse, presumably once associated with brewing, but now converted into a Travelodge. The first pub was the Devonshire Arms, which is just a few minutes’ walk from the station. Like most of the other Burton pubs apart from Wetherspoon’s, this doesn’t open until 12 noon, and my photo shows a group of us sitting waiting outside for the door to be unbolted. It also shows what a bright, sunny day it had turned out to be. This, along with several other pubs, does not open until teatime earlier in the week, making Friday the earliest day when such a trip is feasible. 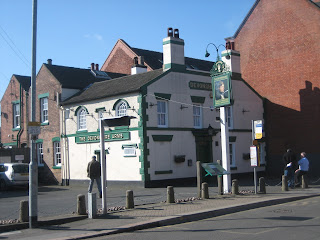 The Devonshire is a four-square, free-standing pub set back from the road and having something of the air of a “country pub in the town”. Inside it has a plain public bar at the front with bench seating down two sides, where our group slowly trickled in over the next half-hour, and a more spacious, rambling lounge at the rear. I met Ian Thurman aka thewickingman, with whom I had corresponded extensively via the Internet, for the first time. We were rapidly joined by another group of customers who we were advised were the local vicar and his family.

For a while, it had been a Burton Bridge tied house, and it still had a variety of their beers including Bridge Bitter and Stairway to Heaven, alongside Bass, which is the biggest seller, and guests such as Dark Star APA and Gates Burton Ale. Most of us went for the Bass, which was in excellent form, although our rather BBB-phobic member preferred the APA. This, for me, was both the beer and pub of the day, although there were plenty more delights to come.

From here, there was a split in the party, with some choosing to head for the Derby Inn, while others went straight to the Brewery Tap, which was the planned lunch venue. While the Derby, which is the nearest pub to Burton Albion’s ground, sounded an excellent pub, it was judged just too far in terms of both distance and walking time. The route to the Brewery Tap passed between a number of brewery buildings and conditioning tanks which dominate this part of the town. We noted that a pipe bridge spanning Station Street that had previously connected two sets of the Bass brewery premises had recently been removed. 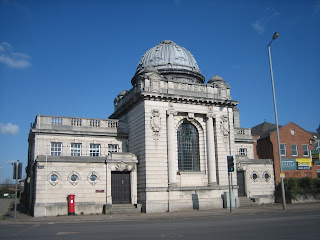 Approaching the Brewery Tap along Guild Street, there is a preserved set of Burton Union casks with the steel trough to collect the fobbing beer running along the top. At the end of the street is the impressive former Magistrates’ Court, built, in 1909-10 in the Baroque style. The Brewery Tap is the bar attached to what is now the National Brewery Centre but was originally the Bass Museum, although time didn’t permit us taking a look around. It’s a pleasant but functional modern bar, and had quite a few customers in, who mostly seemed to be taking advantage of the food. 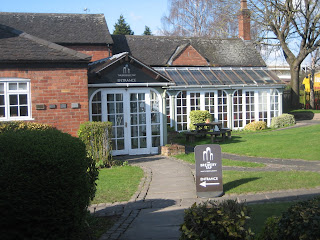 It has an extensive and fairly good-value menu, with most of us taking advantage of a combination of light bites and sandwiches. I got an impressive portion of whitebait for a mere £3.50, and the fish finger sandwiches, which were actually proper fish goujons, also went down well. We considered ourselves decently fed in a town that seems short on pub food options. We were less impressed by a soundtrack that seemed tailored for a much younger age group than most of the customers, including Ariana Grande and what sounded like an entire album from Scouting for Girls.

On the bar were a selection of beers brewed at their own pilot brewery, including Masterpiece, St Modwen and a recreation of Charrington IPA, plus the almost inevitable Bass and Cotleigh Snowy. The Charrington IPA was very good, although distinctly more hoppy than I remember it in the South-East in the early 1980s. Those who had detoured to the Derby Inn eventually caught up with us here. 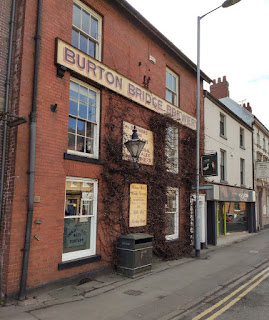 A fairly short walk down Horninglow Street brought us to the Burton Bridge Inn, just short of the Old Bridge across the Trent. This is the home of Burton Bridge Brewery, and is a three-storey Georgian building with the entrance down the passageway to the right. Inside it has a rambling and surprisingly spacious interior around the central bar, with a public bar and adjacent room at the front and an extensive lounge to the rear. The brewery is at the back, and we were told there is a skittle alley on the first floor. Friday afternoon in a wet-led pub is hardly going to be the busiest time of the week, but we were the only people in apart from one other customer who left shortly after we arrived. Hopefully we didn’t drive him away!

There was a wide range of their own beers, including Bridge Bitter, Golden Delicious, Hearty Ale, Porter, Old Expensive and their own take on Burton Ale. With fond memories of the original Ind Coope Burton Ale, I tried the Burton Bridge version, but unfortunately it was rather woody-tasting and past its best. The other beers that were sampled were better, but none were particularly outstanding. The brewery is apparently up for sale, which explains why they have been disposing of their small chain of pubs, including the Devonshire Arms which we had visited earlier.