A case of Corona

We are currently in the midst of a growing crisis caused by the COVID-19 coronavirus pandemic, which is unprecedented during my lifetime and comparable in many ways to the “Spanish Flu” of 1918-20. It isn’t for me to comment on the wider aspects of this, although it hasn’t stopped half the members of Twitter and Facebook becoming armchair experts overnight.

However, something that is closer to home is the potential impact on the pub and brewing industry. Yesterday, the Prime Minister made an announcement in which he advised people to avoid pubs, clubs and similar social venues, although he did not seek to close them down. Again it is not for me to say whether this is the correct course of action.

But it was immediately criticised from various quarters for leaving the pub trade in limbo, in particular meaning that, in the absence of a specific instruction from government, pubs would not be able to claim against business interruption insurance if they had to close down. This was repeated in a rather hasty press release from CAMRA. It also seems a touch ironic for CAMRA to be actually calling for pubs to be closed down.

Again I am no expert in the field of insurance, but I have to say this immediately struck me as questionable, as pandemics surely fall into the same category of risks as war and nuclear contamination, which are potentially existential perils and thus impossible to insure against on a commercial basis. And indeed this was confirmed this morning by the Association of British Insurers, who I assume do know what they’re talking about. 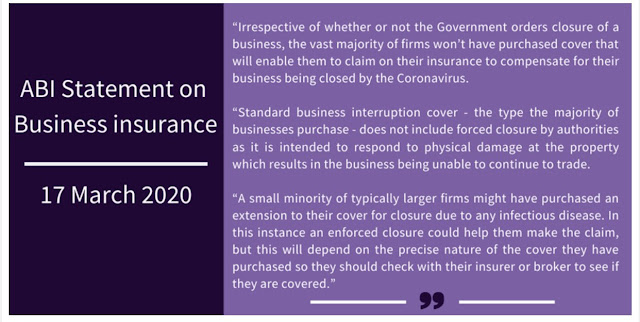 So the suggestion that pub owners would be better off if the government did force them to close is essentially fake news. Clearly there is a good case for government assistance for this, and other, industries that are suffering from the effects of the virus. But, as long as a pub can continue to trade and make a marginal profit, it makes financial sense to stay open. If, on the other hand, they judge that it isn’t worthwhile, then that decision must be respected.

Our four local family brewers – Holt’s, Hyde’s, Lees and Robinson’s – have all announced this morning that for the time being they are aiming to keep at least their managed pubs open. Robinson’s, for example, said:

Robinsons are keeping their managed houses open, and for the rest of their estate have agreed an immediate four-week rent-free period for all licensees with suspension of loan payments and interest charges where applicable.

I don’t consider myself to be at elevated risk of either transmitting or contracting the disease, and I will certainly continue to go to pubs for as long as I can. If I couldn’t, it would deprive me of a substantial source of social interaction.

If the government did instruct all pubs and bars to close, it would represent a massive escalation of the level of lockdown, and to be even-handed it would surely have to be extended to all other on-premises catering businesses such as restaurants and cafés. There would then inevitably be dog-in-the-manger calls for the prohibition to be extended to what might be seen as competing businesses such as takeaways and sandwich shops. This may have to happen in the coming weeks, but that kind of restriction of everyday life, while manageable in a short-term emergency, would prove difficult to sustain over a prolonged period and would inevitably lead to potentially explosive social tensions.