We pick up the story of our Proper Day Out in Burton-on-Trent, the capital of British brewing, having just left the Burton Bridge Inn and heading across the Trent Bridge. Originally built in 1864 and widened in 1926, this is a very long bridge spanning two channels of the river and the intervening flood plain, where there was still some standing water. The amount of rain over the previous few weeks was shown by the powerful flow of water over a shallow semicircular weir. 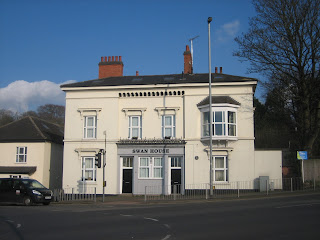 The south-eastern end of the bridge is dominated by Swan House, which was formerly a pub. Here we turned right and followed Stapenhill Road, which runs parallel to the river and climbs a small hill alongside the cemetery, to reach the Elms Inn. This Victorian pub with its striking Bass lettering stands in an elevated and surprisingly rural-seeming position, although trees block the view of the river. I was able to take advantage of a brief gap in the busy traffic to take the photo below. 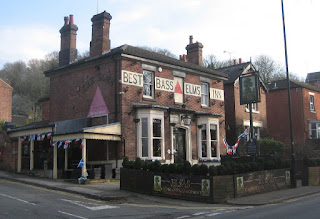 At the front there are three small traditional rooms around the bar, with a more modern extended lounge area to the rear. The central corridor boasts a stone-flagged floor. It was now mid-afternoon, and there were a fair number of customers of mixed age groups. On the bar were Bass, Pedigree, Taylor’s Landlord and Brains Reverend James. The early arrivals were greeted with rather so-so Bass, but they may have then changed the barrel, as those of us who got there a little later found it fine. The person who generally prefers the paler, hoppier beers decided to try the Reverend James as he had never had it before, even though I did warn him it was distinctly dark brown and malty. And so it was, but it was pretty good.

From here, some of us chose to save time by getting a taxi back into the town centre, and the lengthy journey along the southern part of Stapenhill Road and across the newer St Peter’s Bridge reinforced the wisdom of this decision. Our next port of call was the Dog on Lichfield Street, a pub that has gone through various incarnations, including a spell as an O’Neill’s, but has more recently been acquired by Black Country Ales and turned back into more of a traditional pub. 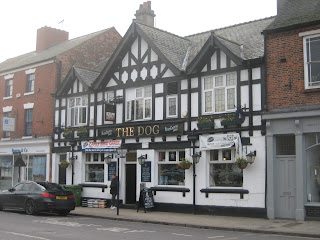 It has their typical high-quality refurbishment, with a variety of comfortable areas rambling around the central bar, but also their characteristic extended beer range, with no less than eleven cask ales being advertised. These included their own house beers together with Bass (of course), and a variety of guests, most notably cask Worthington White Shield. This was pretty good, although I wasn’t sure how it compared with the bottle-conditioned version. Our hop-lover was satisfied with Salopian Safe Room, which was described as a “piney citrus IPA”.

There followed a ten-minute walk through the back streets skirting the town centre to reach the Coopers Tavern on Cross Street, a renowned classic pub that I had somehow never managed to visit previously. It was originally the unofficial Bass brewery tap, but was owned by a number of years by Hardys & Hansons before recently passing into the hands of Shropshire-based Joules. 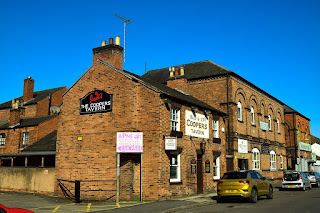 It has a superb unspoilt interior that earns it a full entry on CAMRA’s National Inventory. Pride of place goes to the tap room at the rear, where you can sit on a bench in the same room where the beer is actually dispensed from casks on a stillage, although a short bar counter has been added as part of recent renovations. Further forward from this are a number of other small, characterful rooms with real fires, and there is a more modern extension right at the back. There was, however, some discussion as to how original it was - go in with a fresh pair of eyes, and you would be hugely impressed, but those who remembered it from how it was before maybe felt that some character had been lost.

The beer range comprised the standard Joules beers, Bass and one or two guests including the potent Elland 1872 Porter, on a mixture of handpumps and serving directly from the cask. This was the only gravity-dispensed Bass of the day and, while you would not expect it to have the creamy head of a pint pulled through a handpump, the general feeling was that, while pleasant enough, it was somewhat lacking in condition even by the standards you would expect of beer on gravity. Still a memorable pub, however, where you could happily while away many hours. 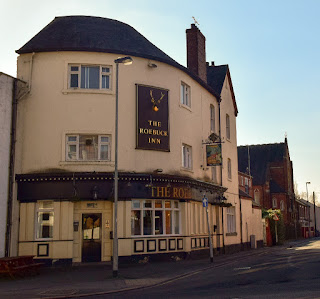 We then returned to Station Street and our starting point, passing the Devonshire Arms to reach our final destination, the Roebuck, a street-corner pub with a distinctive curved frontage. It was originally the Ind Coope brewery tap and was the scene of the launch of Ind Coope Burton Ale in 1976. It has now been opened out into a one-room interior, with the bar along the left-hand side, comfortable bench seating around the walls and plenty of dark wood in the decor. It’s one of those places that seems to have a lot of floor space in relation to the amount of seating, and initially all the seats were taken, but after about five minutes a group left leaving a table free.

The beer range was mainly comprised of familiar brews such as Bass, Pedigree, Summer Lightning and Old Peculier, and all those tried were pretty good. Peter Allen, after a day on the cask, eventually couldn’t resist the temptation and succumbed to a pint of Burton’s biggest-selling product, Carling. We were joined by the elusive Life After Football, who was impressed by how coherent the conversation was at such a late stage in the day. It comes from long years of practice, we told him. Fittingly for his former career, the urinals in the gents’ were fitted with little plastic goalposts where you could steer the ball into the goal with an appropriately directed jet!

From here, it was only a short walk back to the station for trains home. I was pleasantly surprised to find my service to Sheffield operated by a High Speed Train, which are a vanishing species nowadays, but continue to provide a superior passenger environment to pretty much all their successors. So ended another excellent day out, with a very high standard of beer, pubs and conversation, and the added bonus of meeting two long-term Internet correspondents face-to-face for the first time. Given the current worrying news about coronavirus, it remains up in the air as to when the next one is likely to be. Burton is a very rewarding place for the lover of pubs and beer, although it does involve a good bit of walking, and there were several worthwhile pubs that there simply wasn’t time to reach.

Paul Bailey has also written a detailed account of the day here and here.

Thanks to Peter Allen of Pubs Then and Now for the photos of the Coopers Tavern and Roebuck. It should be pointed out that these were taken in the morning, not at the time we visited these pubs when the light was fading The one of the Roebuck, however, is shot directly against the sun.