Inching back to normality 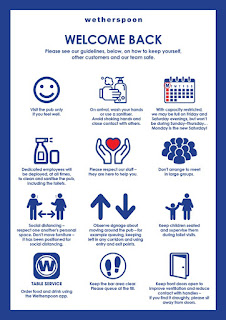 It is now just over two weeks since pubs in England were allowed to reopen following the lockdown on July 4th, albeit under restrictions as to how they could operate. On reopening day, there were a handful of reports of minor outbreaks of disorder, but they were probably nothing more than would have happened on a normal Saturday, and were only newsworthy because of the long closure.

The general impression is that trade has been substantially down, with the Morning Advertiser reporting a figure of 40%. That is certainly borne out by my own experience of visiting a number of pubs. Obviously this is not necessarily representative of the overall pattern, but I’d say they varied between doing reasonable business and being extremely quiet.

With one exception, which is a very small place, none were up to their permitted seating capacity. This suggests that those pubs that decided they needed to require bookings for drinkers had been distinctly over-optimistic, apart from perhaps on the first weekend. Each pub has come up with its own interpretation of the guidelines, so you have to pick up the rules on each new visit. You are likely to be greeted with calls to sign a register or form, and to sanitise your hands using the cunningly concealed dispenser that you have just walked straight past.

I have only encountered one put that allocated me to a specific seat, and that was on reopening day – I suspect it may have been dropped since. I have also had no problem in paying with cash in any pub I have visited. I have been surprised that only half the pubs have made any attempt to ask me for contact details, given that so much concern was raised about this aspect beforehand. Maybe this is a good thing, given that evidence is already starting to emerge of contact information being abused.

Two of those that did were Wetherspoon’s, where the contract tracing forms are prominently displayed by the entrance, but customers are not put under any pressure to comp0lete them. In general, Wetherspoon’s seem to have done a good job of complying thoroughly with the guidelines without making their pubs unwelcoming. To my eye, their interiors have been improved and made more intimate by breaking up the wide open spaces through spreading the tables out and putting partitions up between them. Like other pubs, though, they seem to have struggled with organising a queuing system at long bar counters that weren’t designed for it.

One pub I visited had a portable screen that they placed at the bar to enable a customer to stand next to it, which seemed like a slightly tongue-in-cheek way of paying lip service to the rules. In general, the most convivial atmosphere has been in pubs that preserve separate rooms with bench seating around the walls, enabling customers to sit around the edge and carry on a conversation while still maintaining social distancing.

While there is no way of telling people’s relationship with each other, I got the impression that people from different households were meeting up in pubs and sitting together, showing that on the ground they are beginning to ignore the increasingly incomprehensible rules on exactly who can meet whom where and how far they’re supposed to stay apart.

Some pubs continued to provide beermats, either already out on the tables or handed to you individually with your drink, although the majority didn’t. This suggests that doing away with mats falls into the category of “something we can do to show we’re making an effort” rather than having any real justification.

In most cases, access to toilets was unhindered apart from signs reminding people to wash their hands and keep apart from one another. One pub, however, had instituted a single occupancy rule for each of the gents’ and ladies’, and in the gents’ had taped off the urinals, so only the single WC was available for use. You can’t help thinking that this is likely to cause problems if someone needs to use the trap for the purpose for which it was intended!

At least initially, beer quality was good, as you would expect when pubs were all tapping fresh casks, and most seemed to have made efforts to trim their beer ranges to match the expected lower level of demand. However, this is inevitably likely to fall off as the reduced customer numbers take their toll.

The atmosphere in the various pubs I have visited has varied considerably. Personally, I’m quite happy for pubs not to be too busy, and some of them are places I’m happy to spend time in. In others though, it feels as though there’s just a handful of drinkers rattling around in an oversized building, and in one or two certain aspects of their adjustments made me feel less than entirely at ease. Only one, though, was playing piped music at a volume loud enough to require raised voices, which goes against the guidelines.

The fears that restricted capacity due to social distancing requirements would be a major problem have proved largely unfounded, and the real issue is simply the lack of customers itself. I doubt whether many of the reopened pubs can genuinely say yet that they are trading profitably.

The prospects of pubs are very much tied up with wider economy, and until confidence is restored they will continue to struggle. This is especially true in city centres, where the continued high proportion of commuters working from home has led to a sharp fall in demand, not just for pubs, but for a whole range of other ancillary businesses. The government are facing the problem that it is one thing to create a climate of fear that causes people to curb their activities, but something else entirely to unwind it.