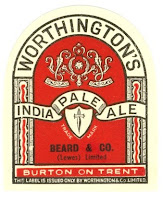 In the early 80s, I was working in the South-East, and my parents came down to visit me one weekend and stayed in a local hotel. This hotel didn’t have any cask beer, but what it did have were bottles of Worthington White Shield, which were probably well out of date. I’m not sure if they even had best before dates back then. They had undergone a vigorous and prolonged secondary fermentation and, if you could actually get the beer in the glass, were some of the finest beers I had ever tasted.

In those days, White Shield was widely available around here in Hydes and Robinsons tied pubs as well as in the Bass estate, and could sometimes offer a welcome contrast to the standard cask beers. But it was noticeable that its regular drinkers tended to be old codgers.

Ed writes here about how White Shield today isn’t the beer it once was, but I’m convinced its decline isn’t a recent phenomenon and can in fact be traced back a long way. Seeing that it was lauded by CAMRA as one of the very few surviving bottle-conditioned beers, Bass decided to relaunch it by putting it in a old-fashioned round-shouldered bottle with an informative booklet on a string around the neck, and at the same time increased the price by at least a third. But they badly misjudged the market, as in reality, while CAMRA may have trumpeted its qualities, it was the codgers who actually drank it.

One old boy in a pub I went in (probably now long since dead) was affronted by this price rise and decided to switch to pints of mild. There must have been plenty of others who reached the same conclusion, with the result that sales fell off a cliff. The rest is history.

And I continue to believe that if a beer is to be produced and sold in bottle-conditioned form, it needs to show evidence of having actually enjoyed a secondary fermentation in the bottle. It should have a dense head and obvious natural carbonation, whereas all too many supposedly bottle-conditioned British ales nowadays just seem to be a bottle of rather flat beer with some gunk in the bottom. Duvel is an excellent example of how it should be done.
Posted by Curmudgeon on March 23, 2010