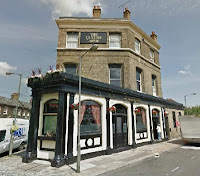 Great Night Out is a comedy-drama series currently showing on ITV1 at 9 pm on Friday nights, which focuses on the lives of four mid-thirties blokes purportedly living in Stockport. Much of the action seems to centre around copious consumption of pints of smooth bitter in the pub, although surely working-class men of that age would be much more likely to be drinking Carling.

Many of the exterior scenes were actually shot in Edgeley in Stockport, but the featured pub, the Admiral Lord Nelson, is actually the Queen’s Arms nearly 200 miles away in Battersea, London, which indeed as can be seen from the picture is a pub of very distinctly “London” appearance.

Some of the best TV moments of recent decades have come from comedy-drama series such as Auf Wiedersehen Pet, but unfortunately this one, while the concept is promising, is actually utterly dreadful, with cardboard characters and unlikely, contrived situations that just do not ring true on any level. Despite the interest of looking for familiar locations, I’ve now given up on it.

Probably the best pub-centred TV show I have ever seen was Early Doors, which had a couple of series on BBC2 in 2003 and 2004. This also had a strong Stockport flavour, with many local street names featuring. Although a sitcom, it was actually like a mildly exaggerated version of real pub life, which perhaps is why some critics found it rather slow-paced. One of the cast was Christine Bottomley who also features as Julie in Great Night Out.