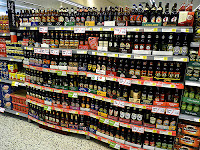 It’s the centrepiece of the supermarket beer display – an array of over 100 different bottles, reflecting distinctive local identities from across the UK, glistening in black, gold, red, blue and green. But it’s something about which Britain’s leading beer consumer group remains distinctly sniffy and equivocal. Yes, it’s the premium bottled ales section, arguably the greatest success of the British brewing industry in recent years.

I’m old enough to remember when, if you wanted beer to drink at home, the choice was very limited, and the vast majority was in cans – Stones Bitter, McEwan’s Export, LongLife (the beer “specially brewed for the can”). But, over time, things changed. There was a steady move from pub to at-home drinking, and brewers began introducing bottled (but brewery-conditioned) versions of the popular real ales people enjoyed in the pub.

By the mid-90s this had become a distinct sector in its own right, but it was still often relegated to a small section of the display that was outshadowed by the mass-market canned bitters and lagers. It’s only really in the past fifteen or so years that PBAs have taken centre-stage in the supermarket beer offering. The choice has also greatly increased, with many more of the established family brewers beginning to take the category seriously (including the four Greater Manchester ones) and a growing number of new and micro-breweries climbing on board.

This report from Marston’s shows the category recording 11% volume growth in 2012, especially impressive when you consider that overall beer volumes fell by 5%. It’s the biggest success story in beer. Yet, as the vast majority of the offerings are not bottle-conditioned, it is not something that CAMRA can embrace unreservedly, if at all.

Of course a major reason for this growth is the continuing shift from pub to at-home drinking, but it is clear that PBAs appeal to a similar demographic to that which drinks cask beers in the pub, and indeed customers tend to see the two as equivalent. I’ve more than once heard PBAs referred to as “real ales”, even though by the strict definition they are not, and this is something borne out by this comment on the Refreshing Beer blog: “I'm frequently informed about the 'real ales' my work colleagues will be enjoying at the weekend, when what they actually mean is a range of bottled ales from Morrisons etc. none of which are real.”

It is clear what people mean, though – while these beers may not be bottle-conditioned, they still convey a strong sense of being authentic, traditional, distinctive, with a well-defined sense of place, maybe even a “craft” product. Something a cut above the mass-market lagers and smooth bitters. Over time, the meaning of words changes according to how people actually use them, and it may well be that eventually PBAs are generally regarded as “real ales” because that’s what people call them.

And, if you think brewers are accepting low margins for this kind of business, bear in mind that the undiscounted price of most PBAs in Tesco (£1.99 for 500ml, or £2.26 a pint) is now actually more than the £2.09 a pint charged in Spoons. Getting a long-run order from a supermarket will give much more reliable business than chasing after pubcos and free houses, so it’s a good market for ambitious new breweries to get into.