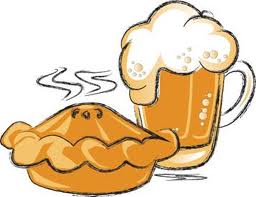 In pretty much every decade of my drinking career, people have claimed that the previous decade has seen a “pub food revolution” resulting in a dramatic improvement in the availability and quality of food served in pubs. However, my memory is that, even in the late 70s, a large number of pubs did serve food and indeed very often were more inclined to experiment than they are now. If there had been a revolution when pubs really took the concept of food on board, it was probably in the period between 1965 and 1975. Even this may be wrong though, as this post by Boak and Bailey suggests that even in the early 50s pubs were regarded as a good bet for a hearty, filling meal.

Thirty years ago there was certainly much less food in pubs in the evenings, and in some parts of the country it could be hard to find food on Sundays. This was especially true of town centres, which before the introduction of Sunday trading were often pretty dead. Undoubtedly a higher proportion of pubs didn’t serve food at all, but most of those were the kind of local pubs that in many cases now have either closed or stopped opening at lunchtimes during the week. I have even eaten quite fancy full meals in pubs that have since gone evenings-only and stopped their food service.

On the other hand, most of the pubs aiming to attract a wider clientele than just locals did serve lunchtime food, and often did very good business from it. I would even venture to say that, in 1978, there was in total more lunchtime food served in pubs than there is now, a big factor behind this being that office workers were much more likely to go out to the pub for “a pie and a pint”. I remember my father often discussing the various pubs in the locality that he and his colleagues had visited for lunch, and certainly during the early years of my working career up to maybe the late 80s this was commonplace too. People weren’t getting drunk or anything remotely like it, but it probably did lead to a dip in productivity in the early afternoon that might not be considered acceptable nowadays.

There were also a lot more restaurants of the Berni Inn type which catered for a lot of the trade, particularly in the evenings and on Sunday lunchtimes, that now goes to dining pubs. Pretty much every major pub-owning brewery seemed to have its own steakhouse chain – anyone remember Boddingtons’ Henry’s Table? Hotel restaurants also had a higher profile amongst non-residents than they do now.

Times change and the pattern of trade alters over the years. But within the drinking memory of anyone of working age today, there was never a time when, as often alleged, it was hard to find anything to eat in pubs beyond crisps and pickled eggs.