Keepers of the flame 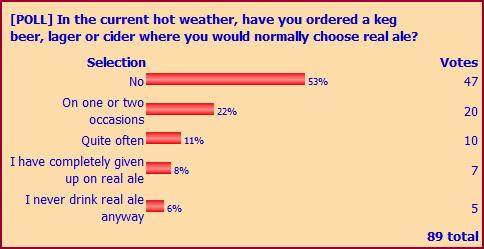 I wrote here about how the recent heatwave has been showing some pubs’ cellar management practices to be distinctly wanting. And Adrian Tierney-Jones has been wondering whether the heat will make this Craft Keg’s summer. So I thought I would ask whether blog readers have felt tempted to forsake cask beer for the chilly but consistent delights of keg.

The result was a resounding “No”, with 53% of total respondents, and 56% of cask drinkers, saying they had stuck with it come what may, whereas only 19% had made a significant shift away from it. I answered “on one or two occasions”, by the way, and there have been one or two more where I wished in retrospect that I had.

There are plenty of pubs that do have the turnover, cooling systems and general nous to serve clear, fresh, cool cask beer even in blazing temperatures, but if you just go in pubs at random you will equally find plenty that don’t. Maybe the split in attitudes reflects whether people’s pubgoing tends to stick to tried-and-trusted favourites, or whether they cast their net rather wider.

Posted by Curmudgeon at 3:26 pm