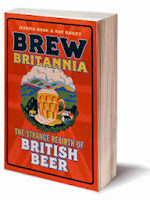 In the early 1970s, the British beer market was increasingly becoming dominated by a dwindling number of bland, dumbed-down beers mass-produced by a handful of giant corporations. Fast forward to the present day, and we have an unprecedented level of interest in and enthusiasm for beer, more breweries and beers than at any time since before the First World War, and more variety of beer styles than there has probably ever been. In their new book Brew Britannia: The Strange Rebirth of British Beer (Aurum Press, £12.99) Jessica Boak and Ray Bailey tell the story of exactly how this apparently unlikely transformation came about. The book is officially released on 19 June.

They have been writing their eponymous blog since 2007. It’s one of the most consistently interesting and wide-ranging beer blogs, but does adopt a distinctively detached and observational tone that isn’t necessarily to everyone’s taste. Some of their best blog pieces have been examinations of various historical trends in the beer world and that approach adapts very well to the longer book format. The end result is a very lucid and readable volume that treats the subject with due seriousness but never allows itself to get bogged down in turgid detail.

Starting with the amateurish efforts of the Society for the Preservation of Beer from the Wood in the 1960s, it looks at the foundation and dramatic expansion of CAMRA, the response of the big brewers, the setting-up of the first microbreweries and the pioneering work of Michael Jackson of presenting beer as something worthy of appreciation in the same way as wine. The story then runs through the politics behind the Beer Orders, which revolutionised the British beer and pub industry, the introduction of “golden ales”, the widespread adoption of American hops and beer styles, the contemporary “craft beer” movement and the growth of trendy beer-focused bars. It concludes by asking whether the tide of constant innovation has currently reached a high-point, while recalling that the same question had been widely asked back in the late 1990s.

Much contemporary beer writing is done under the auspices of CAMRA which, with the best will in the world, inevitably reflects a particular standpoint. The authors are members of CAMRA, and generally sympathetic towards it, but they don’t flinch from recording events such as the conflict over the creation of CAMRA’s own ill-fated pub chain in the late 1970s. They also give due prominence to stories such as the creation of the Firkin brewpub chain, with which CAMRA had a love-hate relationship, and the deliberately CAMRA-baiting rise of BrewDog in recent years. However, they rightly point out that, while much contemporary beer innovation has broken loose from the moorings of CAMRA, without the organisation’s ground-breaking campaigning, much of it might never have been possible.

One of the great strengths of the book is the way that, rather than just relying on secondary sources, the authors have carried out interviews with many of the individuals involved in the story. These include CAMRA founder Michael Hardman, its influential early chairman Christopher Hutt, David Bruce of Firkin fame and the mercurial Brendan Dobbin. This underlines the point that the beer revolution has very much been driven by a number of maverick personalities ploughing their own furrow rather than being an inevitable historical trend.

The aim of the book is to provide a history of the growth of beer enthusiasm and alternative beer in Britain, and so it would be unfair to criticise it for not being something it never sets out to be in the first place. However, the last few chapters do come across as a slightly breathless and narrowly-focused run through a variety of current trends and innovations. Taking a step back, there is a glaring paradox that, while we are more interested in beer than ever before, and producing a greater variety, we are in fact overall drinking less of it than at any time in that forty-year period, and especially drinking less of it in pubs, whose numbers have fallen to the lowest in living memory. It’s entirely possible, of course, that one is the mirror-image of the other, that beer becomes more appreciated the less it is part of everyday life.

Despite this slight caveat it is an excellent and enjoyable book which really is essential reading for anyone wanting to understand the development of the specialist beer market in Britain over the past forty years.

Declaration of interest: I was given a review copy of this book by the publishers. As it is a book I would have bought anyway, I have made a donation equivalent to the cover price to the Royal National Lifeboat Institution, which is a cause that I and my family have supported for many years and seems particularly appropriate given the authors’ current location in Penzance.

Postscript: The above review has been written with a view to inclusion, maybe in a slightly modified form, in the local CAMRA magazine. It’s interesting that most of the other reviews I have read independently reach the same conclusion – the first half, up to the Beer Orders, is excellent, but after that it becomes more bitty and anecdotal. Maybe it will only be possible to put in all into context once a lot more water has flowed under the bridge.