The better part of valour? 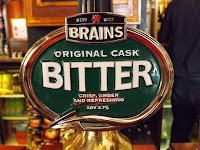 I’m in a Brains tied pub in a Welsh market town to have a bite of lunch. I order a pint of Brains Bitter, which is OK but a bit past its best. There are a couple on a nearby table – he has a half of a paler beer and says out loud “this is terrible, it’s like vinegar!” I suggest he should complain, but he demurs, saying it’s not really worth it if he’s only having a half. It turns out it is their seasonal beer, British Summer.

You can’t really blame him for not wanting to kick up a fuss, and occasionally I’ve done the same myself. As I’ve said before, people go out for a relaxing drink, not an argument. But, on the other hand, if customers don’t complain the licensee gets no feedback and the vicious circle continues. He finishes it and they leave without ordering any food – I have no idea whether they were thinking about eating there.

It’s hardly surprising the average punter is reluctant to order cask beer in unfamiliar pubs if they stand a high chance of getting a dud. And I’d very much doubt whether the pub in question has the turnover to offer four cask beers in decent nick throughout the week – although, to be fair, it did serve up a decent, good-value sandwich.

Would you have taken your half back in those circumstances?

Incidentally, on the same trip I went in a busy Wetherspoon’s, spotted a favourite beer on the bar, and was not entirely surprised to be served up with a pint of soup.